I know i'm late to post this but because of  huge pain ( really HUGE) i was in no shape to read, think or type now that i've started the medecine it's a little better but i've decided to start little by giving you my opinion on another free story from the InCryptid series by seanan McGuire because from all of them so far this is my top favourite and that i'm sure it's not one that Melliane wants to miss - really that's the one you must read even if you only read one!- so to entice her a little more here is my very short opinion ( to avoid spoiler) on Swap Bromeliad 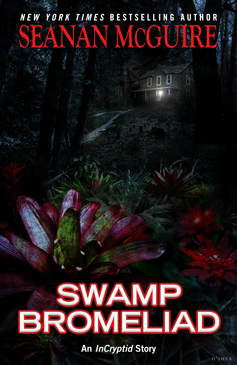 The next stop on Verity and Dominic's great road trip brings them back to where it all began: Buckley Township, Michigan, the town where two expatriates from the Covenant of Saint George once decided to settle down and rebuild their shattered family. It's a sleepy, rural community, long removed from the excitement of those early days...but the woods are still dark and deep, and the things that dwell there are still dangerous to the unwary.

When two little boys appear at the Old Parrish Place, claiming that a flower has devoured their friend, it's up to Verity and Dominic to go out into the woods and see whether or not there's something left to save. It's a journey into someone else's dark place, and it's hard to say who's more frightened by the idea: Verity, who knows how much she has to lose, or Dominic, who has no idea.

It's time to see where the past meets the future, and how the echoes of the one continue to inform the other. It's time to return to the woods of Buckley, and see what can be seen there. It's time to bring a child home.

My opinion:
LOVE it!!!! Really not only this is about Verity who stays my favourite character so far but it has humour, touch of suspense and super hyper cute moments!! Really this one can't be missed, if you love the series it's a must read for sure, you could forget all others shorts( though it would be a shame) but this one NO.

Dominic is really winning points, i love to see him not at ease and ghost aunts are too funny  so this is more than a great instalment in the series.