Snake in the Glass ( Incryptid 3.3) by Seanan McGuire

the sunny weather reminded me that i still needed to give you my opinion on the novellas sequel to Half-off Ragnarok....as you know the InCryptid series is one of my focus this month so it was time that i shared this one with you ( but my favourite is the next one^^) so i could jump on the next book. 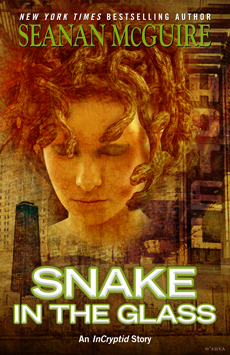 After New Orleans, Verity and Dominic are continuing to put their relationship through what can only be termed the ultimate stress-test: after all, there's a lot of country left to cover before they get to Oregon, and it's not like Verity is picking the most direct route. After all, she'd like him to meet her extended family before he meets her parents. Her parents are more likely to let him live if he has a few letters of recommendation.

The Carmichael Hotel in Chicago has long been a favorite destination of the Price family when they need a home away from home, and what better way to test Dominic's evolving attitudes toward the cryptid world than by dropping him into a nest of gorgons? Besides, any excuse to see Uncle Mike and Aunt Lea is a good one...although there may be a few complications. There always are.

When the modern world meets tradition and tradition meets practicality, it will be down to Dominic and Verity to show that sometimes, the ways you think are best are the ones that won't do anything to save you.


My opinion:
What a pleasure to see Verity and Dominic again, those two are really my favourite so far. verity is on the road to reach her home but taking the side roads to visit monument and family members or allies along the way which takes months^^. Mostly it's to show Dominic what he gained by switching side for her, better to learn step by step or stop after stop.

Dominic is trying to adjust and we can see it well in this short story; he did learn but still stay a bit prejudiced though we discover his romantic side as well.
Verity is enjoying poking at Dominic buttons, it's so funny.

Now it was also great to discover other gorgons after those we met in the book " Half off ragnarok", these ones sound friendlier or at least more accessible.

I spent a great time reading this but it's not one of my favourite because it lacked some action, with Verity i tend to expected a lot of fights but this one was sweeter, sadly too the Aeslin mice while there are nearly silent...so not fun. These are the reason  it's only a 4/5 because all the rest was simply not to be missed^^.