Hello to all and Happy Easter!


New month means new releases and today i'm sharing with you the new instalment in a series i'm just discovering so happy reading!! 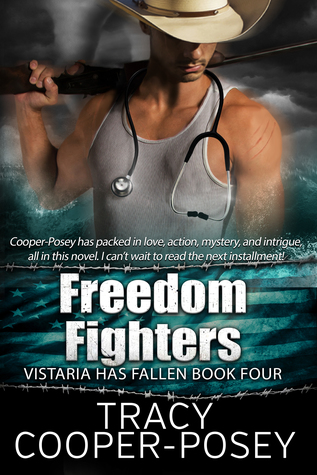 She has evolved from First Daughter to Freedom Fighter.

Once the privileged daughter of Vistaria’s President, Carmen Escobedo now fights with civilian Loyalists to win back her country. She would be content except the rebel unit leader, Garrett Blackburn, is an inhuman slave-driver.

Deeply scarred, physically and mentally, Garrett is a doctor by night and a guerilla leader by day. His cold indifference shifts when Carmen helps uncover an Insurrecto plot to steal a silver mine and use the silver to buy respectability. The freedom fighters must halt the silver shipment no matter the cost…

Get your copy now of the fourth book in the Vistaria Has Fallen romantic suspense series reviewers are calling “original”, “compelling” and “a rollercoaster ride.”

My opinion:
This is my first visit to Vistaria but i really appreciated the fact that this 4th instalment was working really well as stand alone. Yes there is a continuing story line we can follow from book 1 to the last one and yes we meet recurring characters but this story perfectly works as stand alone with a complete story, with information about what happened previously, and romance.

In this one we focus on Carmen who joined rebels in Vistaria despite being the daughter of the late president....she wants justice for her country and to see it back in his full glory.  After studying abroad she came back on her own and joined a group directed by Garrett, a American doctor.  They relationship isn't easy, in fact at first she hates him as he is very strict and without pity but she at the same time realise that he is a very good leader even if he is secret and always grumpy. However as she starts to uncover his past, admiration grows into something even stronger. Carmen is proud, stronger than she think and willing to fight for what she believes in and speaking her mind....as one of the very few female in her group it's even less easy but she stays  true to herself.

Garret had a dramatic past....he lost all those dear to him and wasn't left unscathed ...during the night he is a doctor, an attentive one but during the day he is the leader of the rebels , in a war not his own,and a very good fighter without hesitation...it's a strange dual personality but when we learn his past it makes better sense. He is attracted to Carmen and  protective even if from outside it's look like the complete opposite and him being a jerk without pity. One thing is sure he doesn't play favourite but while it doesn't seem so he is very alert and observant of everything and understand Carmen better than herself at times. He is a good leader and look out for his group. i loved to seem him opening to Carmen slowly as it made sense he wouldn't rush things but not wait forever either.

i loved how we got both side of the story, Garret and Carmen but also saw what the other characters and Carmen's family were doing ^^ it's funny to see how large said family is and how disconcerting it is for outsider or new member. There is violence ( it's a war) but also romance and humour as  Vistaria loyalist have quite a large unexpected range of assets.

i would be happy to read the rest of this series as the setting is original and the characters very enjoyable.