i still have a another title in this series to review but i couldn't want to share this new release with you as it's my favourite so far..... because yes the series is only becoming better and better....so i won't be long as typing is painful.... 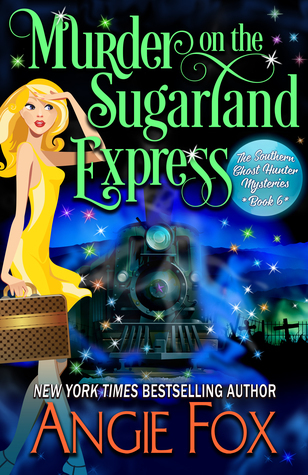 Verity Long is overdue for a little R&R (rest and romance) with her boyfriend Ellis, and a vintage train trip through the Tennessee mountains seems like just the ticket. The Sugarland Express carries history and nostalgia in every compartment, and Verity is determined to enjoy it—without ghostly interference. But the ghosts have other plans…

On a dark, desolate night nearly a century ago, the train was stranded in the mountains and a young woman was found stabbed to death in her locked compartment. The murder was never solved, and a ghostly Belgian detective is still pursuing the case from the grave.

To Verity’s dismay, all of the ghostly suspects are back. And when history repeats itself and a new murder mirrors the old, it’s up to Verity and her friends to discover which of the passengers—dead or alive—could be behind the murders before the killer strikes again.

Captivating! This instalment is perhaps the best so far, good intrigue with several twists, action, suspense, tension and a good dose of humour  simply perfect!!!

This is one of my favourite series and i love the fact i can still be surprised! Verity is really a good character and so loyal and kind hearted now she doesn't always listen to reason but we love her for that. This time all happen on a train journey which mean a specific place, limited suspects and still  a very complicated investigation as Verity must solve a murder in both time period 1929 and now....with the help of her boyfriends Ellis and her ghost Frankie who would prefer to woo his own girlfriend Molly......but Molly isn't that different from Verity so dear gangster is stuck playing good cop as to avoid the ghost detective on the case ( a Belgian one!^^) and impress Molly.

Really all is there,  the little allusion to Agatha Christie is wonderful ( i mean really when you hear "Belgian detective" you can only think of one); the characters are so well though as we discover new side of one we already know and some new one are easy to doubt, hate or love be it living ones or ghostly ones.

I don't want to reveal too much but let say that Ellis and Verity's plan to have a little vacation away from  everyone doesn't go as planned at all, Frankie is a lot more powerful as our heroine stay linked to the other side the majority of the trip and... still isn't on my "like" list but she sure can be pragmatic when needed.

I do recommend you to read the series in order though but  you won't regret it and i can't wait for book 7!

Disclaimer: All opinions are my own and i voluntary reviewed this book
Publié par miki à 12:25 Aucun commentaire:

My health got a turn to the worse, nothing dire but a bit incapacitating so reading wasn't easy and the mood wasn't into it either as well but  i'm starting to find way around it and with a new release ultra soon in one of my favourite series i couldn't resist and jumped on the occasion to review it .....but for that one you still need to wait a few day so while you wait i will give you my opinion on a precedent book in the same series 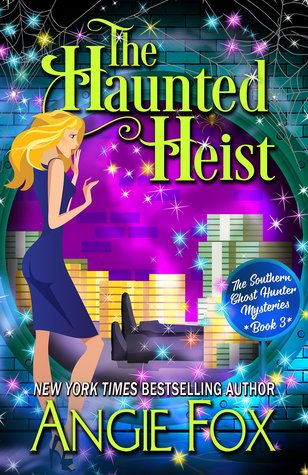 Just because she can see the dead doesn’t mean Verity Long wants to spend her days hunting ghosts. Instead, she’s over the moon to land a marketing job at the local bank…until she finds her new boss dead in the vault. Even her ghost friend, Frankie, knows that's no way to start a career.

Relieved to let the police take charge, Verity steps aside, bound and determined to keep her ghost sightings to herself. But when she learns the main suspect in the murder is a very crooked, very dead mobster, Verity knows it's up to her to solve the case.

She teams up with her ghostly gangster buddy Frankie, as well as the irresistible and charming Ellis, as the three of them search haunted mob hideouts, hidden passageways, and historic cemeteries for the facts behind the heist of the century—and a modern-day motive for murder.

Too bad uncovering the truth could very well make Verity the next victim...

My opinion:
Verity isn't lucky as soon as she get a new job proposal...a death comes to destroy her dream...that aside she is lucky to Have Lucy, Frankie and of course Ellis to help her uncovering the suspect.

I really love this series and we did get to see a new side of Frankie...he may want to seem like the big bad boy but he sure has an heart and does look out for his friend. Verity too is really loyal and we can have proof of that on multiple occasion in this adventure.
Adventures on the other side are full of actions and those leave us very few moment to rest but  at the same time we just want more. However it also leads to more questions: why Frankie powers are acting up for example.

Ellis' mother is still a bitch ( sorry no other words can be strong enough, you will see if you read this series she is too easy to hate) but there are other characters i wanted to slap or strangle.....

There is a lot of action, humour but also touching moments in this new instalment so i easily read it in one sitting and just want the next one. A series to continue

Disclaimer: All opinions are my own and i voluntary reviewed this book
Publié par miki à 07:12 Aucun commentaire:

Don of the Dead ( Pepper Martin 1) by Casey Daniels

i hadn't planned to be silent so long but my health had other ideas and it prevented me to read like i wanted. I'm not healed yet but at least one of the trouble is under control so i had to read a book that was waiting on my night table tempting me.

If you followed me this year you may have seen that i sure read a lot of cozy mystery especially some with ghosts ( Tonya kappes series, Angie fox ones etc) ....while the main center idea is quite similar (a girl solves mysteries for ghosts with their help sometimes) each has a specifity sometimes it's the light humour, the reccurrence of some ghosts, the emotionnal side etc..so when a friend recommended this book "Don of the Dead" i was curious to see which variation it would be and i'm not disappointed ...it's darker than teh other but still with humour and i do plan to see if it's continue like that in the rest of the serie 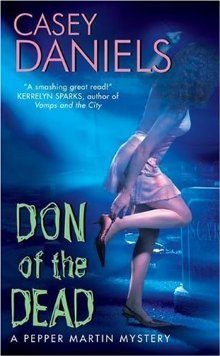 Beautiful, smart, and chic, Pepper Martin never had to work a day in her life -- until her surgeon daddy was convicted of fraud, her wealthy fiancé took a powder, and the family fortune ran bone dry.

Suddenly desperate, the inexperienced ex-rich girl was forced to take the only job she could get: as a tour guide in a cemetery. But a grave situation took a turn for the worse when a head-on collision with a headstone left her with an unwanted ability to communicate with the disgruntled deceased . . . and now Pepper has a whacked Mafia don demanding that she hunt down his killers -- and threatening to haunt her until she does.

My opinion:
Very pleasing, now the idea of a woman seeing ghosts and solving mysteries isn't new but i loved the twist and humour in this one. Pepper is an heroine i could come to like a lot....she is persistent, she doesn't give up despite what life threw at her that i really loved what i loved a little less was her willingness to sleep with all the cute guys she come across ( fortunately a certain don made sure it didn't happen)... it's not that i want her to be prude but i prefer real relationship so i do hope she will mature a bit in that domain.

That aside so far from all the book of the genre i've read she is the only one who get something from her ghost client ^^;; i found that amusing especially how he made her react after. Gus may be her " client" and pester her from time to time but deep down he care and he watches over her. i really loved that because in this story they kind of "give" to each other...She helping him find peace he is making her live for herself, see what she is capable of and protect her the best he can ( teaching her the ropes of being a mafia boss^^)....i loved that because from the time he was alive he would probably have been a bit like that too....because he sure needed to seem stern and all for his associated etc but he still cared about his men and their family and had values.

Really it was a pleasing read and i'm happy to have book 2 ready to see if Pepper grows on me. If you want a paranormal cozy mystery a bit darker this is the perfect one.

Disclaimer: All opinions are my own and i voluntary reviewed this book
Publié par miki à 02:08 Aucun commentaire: