Today, i'm sharing with you my opinion on a new release, first in a new series, Moon Cursed by Tori Centanni.
I must confess that i nearly gave up on this book as the heroine really got on my nerves so i had to take a break but i'm glad i continued as the story in itself is quite good and the book got a lot better as it progressed....but let see that in more details: 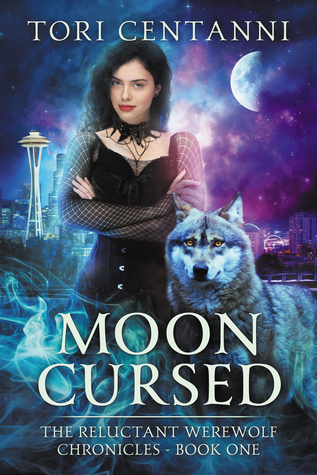 My name is Charlotte Lear and I didn’t want to be a werewolf. But thanks to circumstances totally beyond my control — okay, mostly — that’s what I am. Now every month the Full Moon turns me into a hairy, angry, smelly wolf and all I can do is make sure I’m contained so I can’t hurt anyone else.

I’m trying my best to live a normal life (well, as normal as possible when you’re a werewolf and your best friend is dating a vampire). But when the wolf who turned me insists I go to a mandatory wolf pack meeting, everything changes. Before I know it, a group of militant monster hunters armed with silver bullets have me in their sights.

With the help of an annoyingly dogged (but admittedly kind of sexy) werewolf named Raff, I have to stop the hunters before they kill me and every other werewolf they can find.

Moon Cursed is book one of The Reluctant Werewolf Chronicles, a humorous urban fantasy series with lots of suspense and a little bit of romance.


My opinion:
Hard...really it wasn't easy to get into the story at first as i really disliked Charlie...she is really immature and  so annoying that she got on my nerves. However , if you can read  through these first chapters until the story and investigation really starts  you won't close the book after until it's finished but yes you need to go over the first chapters first.

Charlotte, aka Charlie, is intelligent, she can really be focused on her goals and when she wants something she goes to big end to have it....it could be an advantage but the way she is it's also the opposite as she get too close minded as a result. She wanted to become a vampire....so she studied them in great length, managed to find some real ones and their address when it's not a well know fact they exist to start with....she put years in this project and  for that i can admire her. Now when things don't go as planned and she becomes a werewolf...she doesn't study it, she isn't trying to understand no she just flatly refuse it, shackles herself, refuse to meet other werewolves and keep thinking they are all mindless beast.....
After spending so much time on vampires i can see why she got disappointed but really 3years and more of this childish behaviour? really? complaining all the time, being jealous of her best friend because he could still become one....not even trying to research a little what she has become? For me that was too stupid and childish!
Later in the story we learn a bit more about her reason but still it was hard to warm up to her.

Raff is the opposite, it was hard not to get attached to him, he is courageous, funny and quite patience to cope with Charlie. I really loved him and Michael is an excellent friend as  well.

I really loved when the story really started with attempted murder on Charlie and other cases, the way she is put in the middle and doesn't have time to really overthink made it very interesting as she is discovering by force what she never wanted to see ( and how wrong she was).....the investigation is fast and we can imagine the next trouble that will arise which make it even more tempting to jump already on the next book ( but not available yet so patience it's needed)

There is a little humour yes but also dark moment and lots of actions. There is the presence of some Lgtb allusions ( Damien and Michael, Jessica and her girlfriend) but as it wasn't the focus on the story and just allusion it didn't bother me.

all together i did enjoy it and i'm very curious to see how the author will process for the rest of the series and see if Charlie will mature a little.

Disclaimer: All opinions are my own and i voluntary reviewed this book
Publié par miki à 06:32 Aucun commentaire:


So, already 2018.....i can't say that 2017 was an excellent year so i do have hope for this new one especially since it started quite well as i'm bonding with our new family member..i so needed him. Now i think i can hope for some balance or at least i hope so  to reach that i'm avoiding unecessary stress so if i didn't manage to complete your christmas gift on time i'm sorry i was too overwhelmed but  i will do my best to 2018 an excellent year.

That being said, a year can't be good without good books so it's time i start giving you my opinion on the first book of the year: a romance suspense by Debbie Herbert: Appalachian Prey. 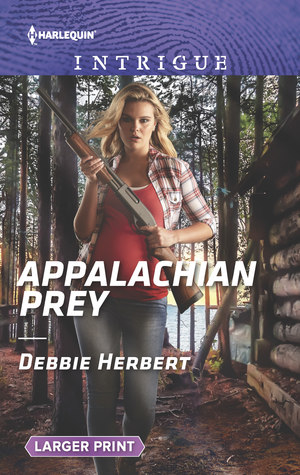 
My opinion:
Very good! This book was perfect to start my year as i really loved it. It's a second chance romance if you want ( i'm not fond of those but in this case no cheating was involved only misunderstanding or something like that) but more importantly a romance suspense and i LOVE those! really when it's cold or raining outside staying in front of the fire immersed in a good investigation is a real pleasure. In this case it's even better as  there are several cases open on which our characters are investigating which make the story even more interesting.

Debbie Herbert wrote very realistic characters and we wouldn't be surprised to meet them at the turn of a street but it also make us want to stay on their side. Lilah is a wonderful woman, she grew facing difficulties but she didn't gave up and despite being from a family on the verge of the law ( to say the least) she became a good citizen. The fact people judged her because of her family sounded very unfair and made her even more admirable for staying true to her beliefs. She was hurt by Harlan while she also understand his reasons and because of that she was willing to let him free.

Harlan has big goals, he want to become sheriff to clean the area from crime.....more importantly he want to become a good man and not repeat the errors of his father however to do so he gets too easily influenced by public opinion so when his superior told him that a relation with Lilah would look bad on him and diminish his chance to be elected he just stop seeing her without explanation....on that side i  didn't like him. He is intelligent as we can see during his investigation but he also lacks courage for what is more important. I did appreciate to see him think about the past and what he really want and what he is willing to give up for that.

the investigation(s) led to some discoveries which added to my pleasure as i don't like guessing everything from the start and with several investigations it wasn't the case.

it's really a good romance suspense that i recommend with pleasure

Disclaimer: All opinions are my own and i voluntary reviewed this book
Publié par miki à 06:01 1 commentaire: