Already September so only 3 months to finish all the handmade gifts i have planned.. the stress level is going up for sure but  this year i do want to manage my time better which means keeping some time to read as well.
However, we are not that far ahead yet.. i have two birthday to prepare this month and it's the priority...

That being said i do want to share with you as well so today i'm introducing you to  J. C. Diem and her Shifter Squad which i just discovered. 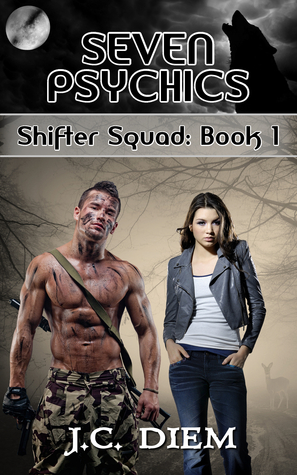 Alexis Levine has just graduated from high school and intends to join the Army as soon as she turns eighteen. Her dream is to become a sniper, just like her often absent father. During routine weapons practice, she meets Mark Steel, the head of a small team of agents who work for a mysterious organization. He needs someone with outstanding skills to help his squad destroy seven psychotic psychics. With her father overseas on a mission, she is the next best choice.

Still reeling from the knowledge that psychics actually exist, Lexi agrees to become a temporary member of their team. From the first moment that she meets Reece Garrett, she is instantly drawn to him. He is strong, sexy and charismatic and unfortunately thinks of her as little more than a child.


Garrett and his team have a secret that few people are aware of. They are shape shifters who transform into ravenous beasts with every full moon. The upside of being shifters is that they possess a natural resistance to mind control, which makes them the perfect team to hunt the psychics. But Reece soon learns that some instincts are impossible for even him to deny. Caught in a mind trap that he can't escape from, he finds himself irresistibly attracted to the one person that he'd do anything to protect.

My opinion:
To be honest , the beginning put me off a little...i’m not fond of guns in general ( it’s not in my culture) and a father who teaches his child that has me ill at ease , now the fact he is military softened it  too it’s a little more understandable even if i’m not confortable with that idea... however i’m really glad i haven’t stopped reading at that point because this is simply excellent!!

Where to start...the world building is more than well done you can easily imagine that(s our world or a parallele ones ( if that rassures you ;))  the author’s writing style is really addictive and i’m curious about discovering her other series to see if  i love it as much as this one.
The characters , you immediately guess what the team members are even without having read the blurb ( oki the titles helps) . They are simply too well written and J C does gives us  hints about the nature of each one. I love Kala and Flynn  they are welcoming and so positive, while Kala is a bubble of energy and love to tease Reece and the others, Flynn is the calm before the tempest. Charming, smiling and very understanding you don’t suspect the force he has.Reece, that’s another matter.. he is an alpha put in the beta role since Mark Steel is the official chief, i guess it must not always be easy for him  and he has quite a temper. He isn’t easy to understand but even when he is terribly grumpy you can’t resist to like him as you guess how good he must be inside. He probably is the one who is the most conscious of what is at stake and how their job and  more could simply disappear if some just decided how expendabel they are.... he is so protective that it’s too cute.

Mark Steele has saved them and he got the post of alpha in that group as well as officially. He trusts his tem and will do anything to protect them i really liked that about him. However i do think he somehow failed in that roles by not understanding wjhat is happening to Lexi earlier.

Lexi has always dreamed to join military but never expected it to happen so soon or that way. While practicing her sniper skill she is approached by a man, Mark, who knows her father and require her talents...soon she join his team while not aware of all what it entails. I did love how serious Lexi is and how she needs her father’s answer before truisting Mark and following him. The way she tried to adapt the situation was both admirable and cute as it showed her real age. Her crush on Reece had me smiling.

The plot was well twisted not completely unpredictable but with enough dosis of surprise and you get engrossed into the story very easily and when it’s done you can’t keep turning the page....sadly it end on a cliffhanger which i hate but the main mission has a conclusion and i’m so eager for the next book that  the cliffhanger is nearly forgotten.

I do plan to follow this series as soon as i can and to continue to tell you what i think of it , book 6 will be released soon so  if you want to try it it’s time if you are lucky you will still find book 1 free in digital book on amazon when you are finishing reading this post.