i'm late again to post this but fortunately it's still the week i needed to post in and it's still august as well so all together i'm not that late ^^. It's just that since we are really starting to take care of my mother to help her recover fully from her stroke i spent the week between the doctor's appointments and call for more.

Now, it's finally the weekend and i hope i will manage to have a little time for me but before i can indulge in some reading and ice cream  i wanted to share one more review for August with you.  Usually during summer, i'm reading more romance suspense however this year aliens took over so it was time to go back to that genre that i enjoy a lot. 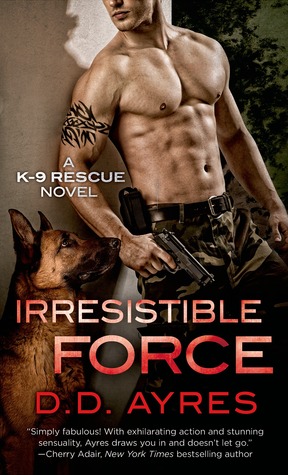 When adrenaline runs high, so does the force of desire…

For Shay Appleton, it’s love at first sight when a gorgeous stray dog is brought into the animal shelter where she works. She just knows he’ll make a terrific watch dog—and with an abusive ex who won’t let go, she needs all the protection she can get. But Shay never suspected that her new pet is actually a trained police K-9 named Bogart—until Bogart’s even more gorgeous, human partner shows up on her doorstep.


Officer James Cannon is one tall, strong alpha male who’s convinced that Shay stole his dog. But once he gets closer to the suspect, he realizes that this stubborn, independent woman not only needs a guard dog, she needs James as well. It seems that someone from her past is stalking her, and threatening her life. When danger meets desire, will James risk his career and his best friend…to protect the woman who’s stolen his heart?


My opinion:
It was a classic romance suspense not really original but still enjoyable...somehow i expected better though. I had a little difficulty to connect with the characters or more exactly with some of their actions even if with some explanations later they become easier to understand i still don’t agree with them.  The way Shay jumps on James when she still knows nearly nothing about him and so soon  just  is something i don’t like, yes i understand her but it doesn’t sit well with me.
That aside she is a courageous woman, more than she thinks.

James.. for a police officer is certainly acts strange at first ( even more when he tells others he is a “by the book officer” but his love for Bogart is really cute and i loved how protective, but not overly so, he is of Shay. His persistence paid off.

Now Bogart aka prince, i guess he is the biggest motivation i had for reading this book. He is so intelligent and cute and the fact he is a Belgian breed just makes it even better. However i think i would have loved if he could bring a little more humour in the story... there is some little elements here and there but not as many as it could have been.
What disappointed me the most i guess is that i didn’t feel like all the villains got what they deserved...we know that some past ones got completely free and other get off really too easily.. i wanted them to suffer more. To justice to be really given this time.

So it’s a good romance suspense if you want an easy reads for the summer for example and if you love dog, it’s one you really can try.