The week didn't go as planned at all  so while i joined Tressa read- a-thon i'm still  far behind my goals as i just finished one book for it and while i'm working on the review you will get soon i decided to tell you about what i had read just before.

Serials have become quite numerous and  it doesn't fit well with the kind of reader i am ( after all i hate cliffhanger so much among other things).
However  i do admit that when we can get the first episodes free it can help us make discoveries we would perhaps have missed otherwise. It's how i came accross this series that i hope to continue one day

So without more delay, here is my opinion on The Hunter's moon from Shawntelle Madison 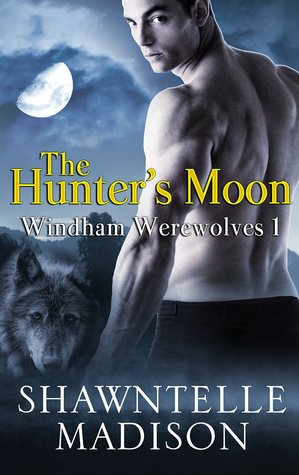 This is the first story in the Werewolves series. Episodes will be released once per month. This is not a standalone story.


Kaden will do anything to protect his pack, including saving a dying werewolf hunter. But Cynthia would rather take him down than become his mate.

My opinion:
I really dislike this new serial trend because one episode only isn’t enough, in most case, to get a real opinion on a story. Now this first episode really made me want for more, it sounds really promising but at the same time I’m missing too much info, character’s background to fully enjoy it.
We get a universe like ours but where werewolves are known and hunted like monsters….

Kaden is an alpha, a doctor too, and he is hell bent on protecting is pack. To reach that goal he made a bargain with an hunter to save his dying sister in exchange for such protection … however we ignore in what form: an alliance, information that’s left to be discovered. I really liked Kaden , we can feel his compassion and need to protect, he is really an attentive doctor but often to be able to study and practise he had to hide his nature.

Cynthia is dying from a cancer, before that she was a talented wolf hunter with her brother…since little she has been taught that werewolves were monsters, eating people and other things by her parents so she never questioned that teaching. When she wakes up in a cabin with an werewolf her first instinct is to try to kill him….slowly she learns that her brother is being her presence there but still she doubts Kaden’s intentions and doesn’t make it easy for him.
I’m still not sure what to think of her….. I hate the fact she did never try to question what she was told, and it doesn’t help that I don’t really understand the hunters’ structure yet. So far we gather that they are organised in clan with some freelances but what are the clan really ( extended family? Group of people without blood link, what about the hierarchy etc)… She does seem worried because if her presence was to be known by other hunters she would be hunted as well….

This first episode is short but it’s evident the author wanted to catch the reader’s interest which is working but only if the rest of the story answer those questions…. So far we have a little idea of what hunters believe werewolves to be to nothing on the real habits of werewolves (safe that they can change without the moon)
The relationship moves up a little too quickly for my taste as well but I understand it as being part of the serial conditions.

Do I want to read more? Yes definitively but I’m really relieved that the complete story exists in print already because no more serial for me for a time, it’s too frustrating. The print book is only available on amazon though so not that easily easy for me to obtain but I do have hope for the future as I really want to learn more about this universe and I like the author’s writing style