This week has been quite busy for me as i had two birthdays to work for and, while i do it with great pleasure ( my best friend and brother deserve it), it does take time. Fortunately i should get  a little more reading time now which is great as i plan to participate in a read-a-thon starting next week.

But since we are not there yet, i'm happy to share with you my opinion on Viper moon by Lee Roland. 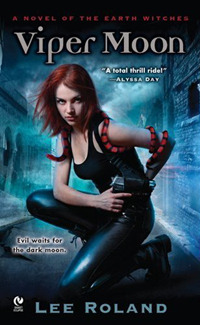 
Cassandra Archer is the Huntress. She has faithfully served the Earth Mother for years, rescuing kidnapped children from monsters-both human and supernatural-dwelling in the ruins of the Barrows District. But when two children are kidnapped under similar circumstances, all clues point to a cataclysmic event on the next dark moon. Now Cass must race against the clock and prevent a sacrifice that could destroy the entire town..

My opinion:
Interesting but I still have mixed feeling about this series. To begin, I did enjoy the book, a lot even. I spent a good time not guessing everything and enjoying the ride. Cass is a character you get attached too, fiercely independent she still doesn’t like to be alone thus her funny and attaching pets with their own mind. I’m no fan of serpent, I won’t be, but Nefertiti and Nirah nearly won me over; and Horus, the feline, was simply impossible to resist with his antics.  I liked Abby a lot too and I felt for her as it must not be easy to send those love into dangerous situations like that and simply have to stand aside without being able to do anything.
Flynn…I’m a little torn on a side I loved how loyal, protective and good cop he is, on the other side the way he react sometimes badly to the mysteries he has to face and at others time too quickly I just could not decipher him too well and at the end I liked him but not as much as some others. Michael for example.. While he isn’t a bad man he isn’t a good one either… he is more into the grey zone but he did not try to hide it, he was consistent in his actions and his words… he did have a hard life and in a sense I admire him for managing to stay in, the grey and not fall into the dark zone. Same for the mafia boss Carlos, he isn’t good but he really loves his son. I won’t agree with lots of his actions but he was honest in his behaviour, staying true to his way of thinking…. He doesn’t get suddenly all white or darker if you see what I mean. Both Michael and Carlos  actions toward Cassandra were motivated of course but  true in a sense, they did not doubt her, they offered what trust they could ( in their world that’s something not given lightly)and shared what secret they could.
Flynn keeps a major secret as well and to me it did not seem fair, during a long time he alternate between trusting Cass and judging her and that got on my nerves even if I could understand his reasoning

So the romance was good but with his hesitation it came too quickly in my opinion especially if we consider the stress he was under.
The investigation part, I really loved the paranormal aspect did spice thing up but honestly I don’t remember a book I’ve read lately with so many casualties that I lost count like with this one… yes not all of them are described in detail…. For example we are told the whole gang blow up into little piece, not many more details, no numbers but that’s quite a lot and when you add all the others it becomes quite messy ^^;; not speaking of the sewers and creatures in it.

The fact is that I enjoyed this book but at the same time I doubt I will continue the series… why? Because I need to have the same characters or recurring ones at the moment and I fear that with this series it won’t be the case so until I get an answer for sure or find the next book in a book fair or something I will stay with this one as it end on a good place, not necessarily the end I would have wanted in detail but a good one to make a break without being angsty.

If you want a book with witches, strange creatures, characters neither good nor evil, magic and suspense as well as some humour you could try this one. It’s really worth it.