The weather is spoiling us right now with 7 degrees above the normal ( nearly 17°c) and a bright sun so i won't be long because i want to enjoy it as long as i can ^^, it way to early so we know it won't last but it's really good for the moral to savour it when we can.

Today i decided to pick a book from my pile that fitted several challenges and i opted for the fourth book in the Jane Yellowrock series since it got shifters and witches and is an older book too... i've enjoyed the book but strangely i had a little more difficulties to express my opinion on it so i can only hope i will be clear enough^^

happy reading and i hope spring will come to enlight your days no matter where you live. 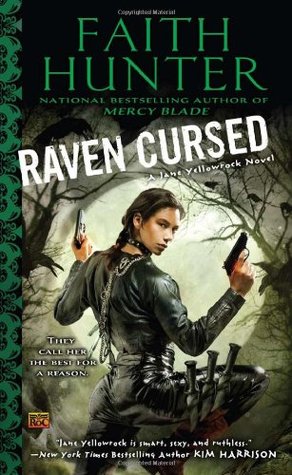 The vampires of , want to establish their own clan, but since they owe loyalty to the Master Vampire of they must work out the terms with him. To come up with an equitable solution, he sends an envoy with the best bodyguard blood money can buy: Jane Yellowrock.


But when a group of local campers are attacked by something fanged, Jane goes from escort to investigator. Unless she wants to face a very angry mast vampire, she will have to work overtime to find the killer. It's a good thing she's worth every penny.


My opinion:
I have mixed feeling this time… oh I do have loved this book and it’s still as well written as the precedent and a great addition to the series. However I had some trouble to understand Jane this time or agree with her decisions….as a result I was quite angry at some moment even if I couldn’t put the book aside.

Jane finally reveals what she is at more people but that was what I felt wrong….she could have say the truth to her shaman Angie that I would have understood….Derek Lee too (until now he was my favourite) but she tells it to Ricky.. the unfaithful, lying, deceiving man of her life…. In my opinion It could have been the worse choice, not that I would have loved to see her tell all her secrets to the vampire but Ricky! Arg I don’t trust him for a second and he is tempted to go back to the enemy once again , with a special agency that is dangerous for all supernatural.. arg Jane think with something else than your body! Beast is perhaps thinking Ricky could be a great bed partner… but she doesn’t see herself bound to him for eternity so secret should be kept!

It’s true that I always preferred Derek the more responsible and one that’ seemed to understand Jane better….now it’s not exactly what happen in this story but I guess all friendship needs to be refreshed at a time or another, especially since they were more partner, colleague than friend to start with.Derek at least stay reliable in my opinion. We don’t see too much of Leo this time, even if we do hear a lot from him, since it’s Gregoire that Jane is tasked to protect and  that  outside New Orleans….I didn’t remembered Gregoire well I admit but I was delighted to see more of the B-Twins and they are working well with Jane all the while being more than simply colleague….when she needs understanding she didn’t think it would come from them nor did she think she would need it but they were there and I want more of them.

This story focus largely on the magical part since Evangelina, head of molly’s coven is practising illegal magic and… black magic too. I hated her and that feeling just grew stronger that woman is pure evil and completely out of her mind this time she even goes against her coven, yes we don’t know all her past but still….i don’t approve her at all. So magic is predominant this time even if the shifter part is still well built with the werewolves who escaped last time, the lack leopard who still need to be taught a lesson and Ricky which we still don’t exactly know the future..

I really appreciated to get a little more of the Cherokee legends since Evangelina called one demon from them but Angie baby knows more than it seems and it was really wonderful to learn and it let so many possibilities open, I do want more .

However another part disappointed me a little: Molly…..we don’t often see strong female friendship so I was really happy to see Jane and Molly….despite her husband not liking her friend Molly stayed true to their friendship… until now. We discover that she doesn’t trust Jane near her children as before since she doesn’t go again Big Evan. Sadly it just got even worse….it’s something I regret, I do hope we will see the situation improving but I’m not sure. Jane has another friend prospect, on the vampire side but friendship needs time to grow so it’s too early to tell.

The story was fast passed and the humour vastly presents despites the violence and heartbreak so it’s really an excellent instalment in the series, I can’t wait to start on the next one either. I would recommend to read this series in order but at the same time, if one book could be read without having read the precedent ones it should be this one, the author gives the necessarily information and the story is focusing so well that you are immersed directly.

If you love, magic, shifters, vampires, native American legends, history, humour and fast paced action, this series is right for you