"Carnaval" has started here so it also means lack of sleep in my case ( no i'm not partying just suffering the drunks noise in the street and the pub's music loud enough to be hear several streets away ( yes that loud)). The advantage is that i can hide and try to read as much as i want ^^ after i do share a little with you, of course.

This monthy was more fror reading pleasure than anything else even if Kimba from Caffeniated Book Reviewer really helped me to stay motivated and to read more...still i promised myself that i would try to read a book or an author that has been recommend for me for a long time.. one each month... how to try to mix the 2 goals? Simply by trying a new series by an author that has been added on my favourite list already.

I discovered Nalini Singh thanks to the PsiChangeling, published in French by Milady and i loved it nearly instantly ... later i was told she has another great series with angels and vampires but i didn't managed to get my hand on it until a few month ago....i ignored it was also translated but by another publisher so this Guild hunter series i  will read in VO. Also thanks to Nikki i got more books in the series because i was quickly addicted^^ now i just have to read faster because i do want more 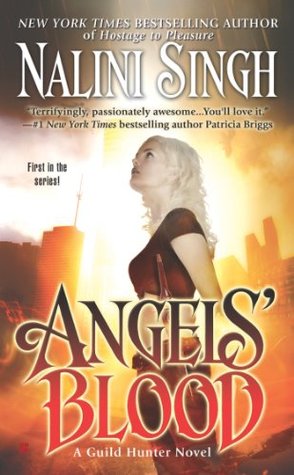 Vampire hunter Elena Deveraux knows she is the best- but she does not know if even she is good enough for this job. Hired by the dangerously beautiful archangel Raphael, a being so lethal that no mortal wants his attention, Elena knows failure is not an option—even if the task is impossible.

Because this time, it's not a wayward vamp she has to track. It's an archangel gone bad.

The job will put Elena in the midst of a killing spree like no other—and pull her to the razor's edge of passion. Even if the hunt does not destroy her, succumbing to Raphael’s seductive touch just might. For when archangels play, mortals break


My opinion:
Nalini Singh ‘s writing is real magic.  She manage to drew you in her universes and you feel at home; it was the case with the psychic and shifters in her “psychangeling” series, this time it’s angel and vampires but the magic still operate.

I love how she doesn’t give you all the keys to the world, in which the story is set, right at the start but you never feel lost. You have enough to start and you grow up with the main character as he or she is learning so do you. her universe become steadily more complex but it’s gradually done so you feel at ease immersed in the story.

In this first book, we focus on Elena, a vampire hunter , member of the guild. To explain without saying too much  ( after all we still know little specific),she is a born hunter which in this universe means she has a talent to detect and thus hunt vampires but as a member of the guild she only hunt those who have become bad or tried to breach their contract.
Contract? Yes, here vampires are made by angels ( strange no?^^) , it must be consensual, the human petition to be made vampire, the angels study his/her case and if accepted he is made in exchange for 100 years of service… so yes servant or slave it depends on the master, the angel but in any case so is the contract and that’s done also to protect humans. When a vampire trie to leave before his time, the guild is called to bring him ( her) back.

Now the born hunters are few and the guild has hunter without that specificity too, I wouldn’t say other hunters are “normal humans” but they differ from Elena and the hunter borns, they can have some immunity perhaps ort special talents but then so far we don’t know a lot. Elena is the best in her branch and the best friend of the director of the guild ( who is elected by the way), she also has another hunter born has a friend: Ransom.
Now I spoke of the hunters, of the vampires, what of the angels? You can’t imagine a world divided in two angels on one side, vampires on the other, good vs bad. It’s really more complex. Yes the angels makes the vampires but some of them have an higher rank than some angels, of course it would take centuries for them to reach that level of powers but it’s possible. In fact the world is divided in a kind of sector or kingdom some would say with at their head an archangel (male or female) . The archangel is the one at the top, the one who ensure peace and keeps angels and vampires in line. To reach that result, yes they can be cruel, the longer they lived the less connected with humanity they are, some really thinks of themselves as god.  An angel can with time and if he shows some specific power become an archangel… however they number are limited to ten, and it’s their council that takes the decision like judgement on a archangel or those who affect the world in general.
Archangels and angels are immortals (like vampires) but if it’s hard it’s not impossible to kill them. Also they can reproduce but the birth rate is really low, vampire can too with a human mate but only if they are not too old ( less than 200 y)

All of these infos don’t cover everything so you can imagine how an interesting universe it is.  I really loved to see Raphael, the powerful archangel start to doubt himself thanks to Elena sharp tongue and resistance.  I do love how all the angel have a different wing pattern  too, it’s exciting to imagine or guess who has what. But I must say I was really intrigued by the seven. The seven are composed of vampires and angels and are the honor guard of Raphael; he is the only archangel to have such a group of highly loyal supporters, the top security? Dmitri is making me curious but he is not the only one….contrary to what we could believe they are at that place by choice and won Raphael’s respect and trust…they chose to be loyal it’s not because he made them ( I don’t know if he made any of the vampire in that group but I’m sure for 2)…. He is an intelligent leader even if he was sometimes too cruel ( normal for an archangel). Now yes he can be cruel but he still care for those under him and we can see it’s not the case for all the others member from the ten…he was a little too alpha and too forceful with Elena but he never crossed the line, it was instinctive but she didn’t react well to the compulsion and mind talking ^^;;.

Elena has a troubled past and is an outcast for her family that made her really independent which is why she was fighting Raphael’s orders at first until he went in her head and made her so angry. But deep down she is loyal and understand him better that what he thinks there are a good match and I’m glad a later book in the series will focus again on them.

This book has a cliffhanger for the main story line, but the story between Raphael and Elena and their hunt has a closure so I definitively want more but if I had to I could wait without too much stress. If you love urban fantasy with steamy romance, fierce fighter and hero with a huge ego^^ this is the book for you!