i know i've already posted something today but it wasn't book related so i decided to give you this bonus^^. Like i said precedently, at the moment, i'm ejoying browsing in my TBR pile to find books with druids, Celtic Legends or Magic ...special time of the year for me^^....( Blame Saint Patrick if you want ;) ).

So far, i started new series, or i read stand alone but today i go back to a series i put aside a little ( still need to get the more recently released books) the Deadtown series. At first i discovered and started it because it included zombies and it was a topic for challenge i entered...not my favourite subjet i admit but then... i remembered from where the main Character got her special talent ^^; and yes it fits what i'm looking for  right now^^ thus here comes my opinion on Bloodstone by nancy Holzner 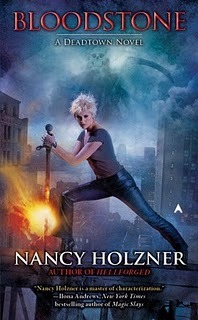 Boston’s diverse South End is known for its architecture and great restaurants, not its body count. So when mutilated human corpses begin turning up in the area, the entire city takes notice. The killer—dubbed the South End Reaper—uses a curved blade for his grisly work. And even though there’s no real evidence pointing to a paranormal culprit, the deaths are straining the already-tense relations between ’s human and inhuman residents.


As the bodies pile up, Vicky, her formidable aunt Mab, and her werewolf boyfriend Kane investigate, only to find that the creature behind the carnage is after something much more than blood…


My opinion:
What I really enjoyed this time is that even if it has been ages since I read the precedent book I fell immediately back in the universe Nancy Holzner created. There were enough info to put us back on track especially since the events in Bloodstone are deeply linked to those in Hellforged, some are related to events from book 1 because we see again Vicky’s family and her niece Maria but even those are detailed enough so a newcomer to the series wouldn’t feel completely at loss starting here ( though I don’t recommend missing the first 2books)

This story focus on demons yes plural because Pryce is still around but he isn’t the only one sadly and we discover how deeply rooted in the celtic legends both his and Vicky’s family are. We knew she is Cerddorion and that’s what makes her a shapeshifter but we didn’t know a lot apart that…since this book involve all her family  we learn a lot more and while some were predictable it still surprised me quite a lot. Maria is starting to show sign of the awakening of her powers and that frighten her mother Gwen more than anything so she ask Vicky help.. then Mab the elder of the family and master at demon hunting come to the rescue (or intented to^^) and we discover a complete new side of the family and it helped me to understand Gwen a little more…if the past had been different she would perhaps not have chosen the same path ( or not so quickly)

We also learn quite a lot about the Old Ones, the special vampires (though I won’t tell more because it’s complicated and I must keep the surprise twist^^). It was deeply interesting and I really thought the series reached another level.

I loved that we saw a lot of precedent characters like Daniel, Tina, Norden, Gwen, Juliet etc and for those who follow the series we finally discover what species Axel the bar owner is^^…;it was the funny part I guess.

The investigation does come to a conclusion, there is no cliffhanger but you feel the series isn’t finished far from it and it was really well done. You can take a break after this book or continue the series immediately by jumping in the next book one way or another you won’t feel bad in my opinion.
Now this book is also darker than the precedent ones, I had to shed a little tear here and then too but the rhythm is really well paced, not rushed. All is linked and fall into place. So I can only recommend this book if you love zombie, vampires, shapeshifter, magic  because this book has a lot of it^^, action and dark ambiance^^.