So yesterday was the release of the third episode of  Storm Force by Susannah Sandlin thanks to the publisher who decided to do a weekly release intead of one every two weeks. Since it's becoming even more addictive than it was , i'm really happy about this decision^^

I will try to do share my opinion of it with you each week ,however after thinking about it this post will be scheduled on Wednesday . I think it's better since the release can happen anytime on Tuesday and for those who follow i want to let them have some time to enjoy it before entering a discussion^^. And like last time, even if you are not reading the book as of yet don't hesitate to participate in the discussion with the questions you feel safe to answer and you can also go back to precedent dicussions too 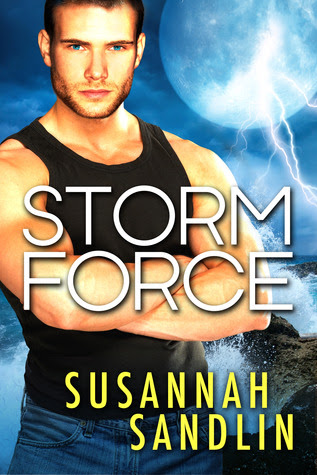 Story:
Episode3: While Kell is set on obeying orders even f they clash with his moral code, Mori starting to think about give up under the threats.  However Michael is really determined and acts to reduce Mori’s possibilities of action, even if the team knows now that shifters have aligned with the opposite camp, the reasons and their identity is still unknown. Kell only has a few minutes to make his choice.


My opinion:
I really can’t wait until next instalment, the tension is going up with each release and my dislike of Michael is proportional to my appreciation of Kell and his team.  I guess the only thing that bothered me a little was how far Kell was ready to go to follow orders even more when he was so conflicted about it. It must be so hard for him but Susannah Managed some twist to make it happens differently in a way that had all my preference even if Mori’s feelings of powerlessness were the decisive factor.

I really appreciated to see how alpha Kell can be when he goes all protective, it’s really cute and not really something I expecting or at least not so strongly he is marking points^^. I do also appreciate to see how his team is reacting as a group I mean they went to save gator and it’s something some wouldn’t thought of it ( when I was reading the part where the danger was, I was so afraid the “ugly” was going to take revenge on poor Gator, really stressed^^;;;)

I enjoy to see the characters starting to act more for themselves than for duty and taking risk for that even if it’s just for a little instant. Now we will have to see how the secrets will mix with that but the suspense and tension is really moving up to several levels higher and I’m becoming more and more immersed in the story so can’t wait for episode 4;even more that episode 3 does have a big cliffhanger ( though keep in mind that it’s a serial, not the book  yet)

Disclaimer: Source: a copy in exchange for an honest review, no other compensation was received.All Opinions are my own

1)       How far would you go to follow order? To please your superior? And to save someone?
2)       Should species in danger protected depending on their “cuteness”?  What can be done for the species more “ ugly” or less liked?  ( I mean some spider or snake for example  I wouldn’t want to pet them but I do understand they are useful ( still keep them far away from me!) ^^;;)