Under the Gun (Underworld Detection Agency 4) by Hannah Jayne

Only a few days left before school start again and this month teh weather made us think we were already deep in Autumn ....so the mood isn't at the top but i'm enjoying my gifting preparations^^ ( the weather is just what i needed for it^^) also apples and pears are in profusion so i 'm planning some delicious cakes.. after all we should always try to see the positive of each situation^^ it makes us live longer;)

So since summer is nearly behind us so is my stock of romantic suspense but with all the excellent ones i discovered i will follow up the series so you won't have to wait too long before seeing more^^. Until then back to urban fantasy with the fourth installment of a series i've shared with you already....not my favourite ( far from it) but one that is mostly enjoyable ( after all, i still read it^^). 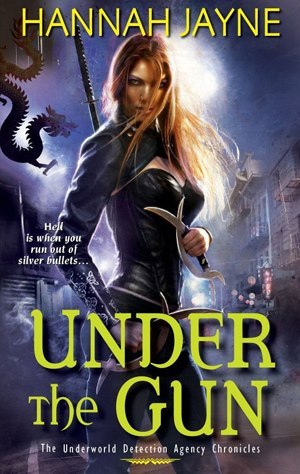 When you’re near the top of the Underworld Detection Agency, the claws really come out…


Quick thinking and loyalty have taken human Sophie Lawson a long way in the UDA—along with a healthy dose of magic immunity. But when her old boss Pete Sampson asks for help after a mysterious two-year disappearance, she’s determined to find out what high-placed demon has put two ruthless werewolf killers on his tail. Of course, sucking up to her icy vampire department head and negotiating a treacherous inter-office demon battle are the kind of workplace politics that could easily get a “breather” way worse than reprimanded. And sexy fallen angel Alex is doing whatever it takes to heat up Sophie’s professional cool and raise feelings she’s done her best to bury. Too bad their investigation is about to uncover the Agency’s darkest secrets…and powerful entities happy to sign one inquisitive human’s pink slip in blood…


My opinion:
When I started this book I hoped to like it better than the last but unfortunately it didn’t happen. Oh yes the investigation was more entertaining and had some interesting twists that had me keep reading. However I was really disappointed by Sophie.

Until now Sophie was a character that showed a lot of loyalty and trusted her friends all while being often underestimated even if she is far from powerful or strong willed… I wanted her to improve with the time, to mature and learn. She did learn to fight and she is standing more for herself and what she thinks that’s true. However that was accompanied by her loosing her trust, her faith…  Seeing her lying to those she call friends, doubting them again and again wound me.
Sophie is stronger physically, perhaps psychologically as well in a sense but she isn’t the same good heart as before.

Seeing her doubting others like that disappointed me a lot, it even got irritating after half of the book. She couldn’t make her mind about her loves interests either.  That added to the fact that this book was a tad darker than the rest with a lot of violence and deaths of characters , which I wasn’t fond of but still, didn’t help me to enjoy it as much as the first one even if the focus was on werewolves.

I took a long time to write this review because I perhaps felt too angry at first to really put my opinion into words, after a moment I see that I did like this book, mostly thanks to Vald and the sword teaching part^^ funny and just coming at the right time. Simply it wasn’t what I hoped for  ( and I’m still angry at Sophie^^). I still want to continue the series and I do think I have the next book ready somewhere but  it’s not my favourite series of the moment at all.

I guess that what I liked less in fact was all the political aspects, secrets, manipulations etc that we discover. I prefer honestly so learning that so many things went behind the back of the characters and that’s is far from finished and we are starting to be unsure of who are the really good ones ( and if we hesitate, that Sophie does as well is more understandable )

I can only hope next book will have a good investigation part and some cleaning the staff of bad elements because some really need to be taken out.

So a good book that fit the series but must be read in order, if you love suspense, investigation and supernatural creatures this is a series that should please you.