I don't often post  review on Sunday but the week went too quickly and i didn't want to miss a week so here i am. My dog is still improving and you can imagine how happy i am to see him ask for food and having more energy, now i just have to be on par with him. On the reading side things like to get in the way to reduce my free time while there are several books i just want to jump into it. Hopefully things will calm down and my health stabilize so  i won't have to wait longer^^

Until that happen, i'm sharing with you what i though of book 5 in the Jane Yellowrock series by Faith Hunter. 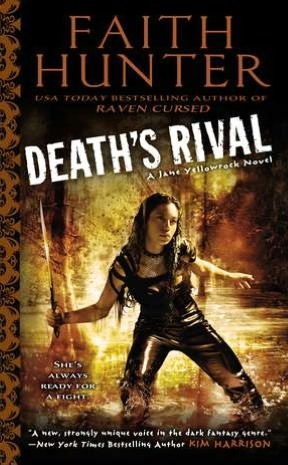 
For a vampire killer like Jane, having Leo Pellisier as a boss took some getting used to. But now, someone is out to take his place as Master Vampire of the city of , and is not afraid to go through Jane to do it. After an attack that’s tantamount to a war declaration, Leo knows his rival is both powerful and vicious, but Leo’s not about to run scared. After all, he has Jane. But then, a plague strikes, one that takes down vampires and makes their masters easy prey.

Now, to uncover the identity of the vamp who wants Leo’s territory, and to find the cause of the vamp-plague, Jane will have to go to extremes…and maybe even to war.


My opinion:
I’m starting to wonder where the author wants to take us…. I still love the concept and it’s originality : a skinwalker with a beast soul joined to her…. I love the story in general but the romance part is starting to get on my nerves I guess.

I can stand a love triangle if it has some substance but in this case Jane  has exceeded the triangle a long time ago … first there were Leo, Bruiser and Rick, then you add Derek lee ( at least a minimum) now seems like the new character Eli is on the rank too…..  it’s a little too much in my opinion especially when Beast don’t want to choose and just take them all….
First she can’t trust Rick I don’t even think she trusted him once but since the last book he decided to join PsyLed which is opposite to Jane’s Camp…so he is out ( even without the fact he got were and could change her) Leo…. Arg I dislike him even more after this book, one book makes him more approachable the next shows how a jerk, arrogant and totally disgusting man he can be….. Bruiser….he was the one who had the more chances if he wasn’t Leo ‘s Pet… now it show how that come first before all the rest ( no I don’t forgive him) Derek Lee… they should get their fight to establish where each of them is and then perhaps though he sound a little too intolerant … now Eli….i guess he is the best placed right now: yes he is fully human but strong, loyal and protective and responsible ( and his brother just is a bonus since Beast likes Kit)
Now this book is urban fantasy not full romance so as long as this stays in the background I think I will continue to enjoy the story but simply…. I want to see Jane takes some decision and stick to them.

The story in Death’s Rival is an excellent new instalment in the story because we do learn more about Jane ‘s past and history which help to understand her better…and the investigation is really interesting with suspense and twist that keep you hooked and turning the pages.
After the events in the last book, Jane is alone mostly. Her relationship with Rick is in standby to say the least and her friendship with Molly broken (that part I really regret). Beast is more active and… in a sense more sentient that before she can hide things from Jane but we learn that she decided to stay with her and that speak a lot about Beast loves for Jane which she has come to consider like her kit.

Before Jane wanted to leave New but we find her again in the service of Leo and really busy. A plague, an illness that can actually kill vampires has spread and some clan have sworn allegiance to another master than Leo after being infected…. Not believing in coincidences, Jane is investigating the case when she is nearly killed several times….Leo ‘s rival  is threatening him  under the pretence of a murder Jane would have committed. Things aren’t that simple though and Leo decides to take drastic measures to protect himself and his…. Which result in a trust completely broken… between him and Jane but also Jane and Bruiser ….yes he is an old vampire who  thinks with the laws of the past but  I was really put off by his actions and he dropped from my list of liked characters in matter of second… how Jane can still work for him I wonder. I hate even more Katie, Jane saved her, helped her and at the first occasion she turn against her, really disgusting.

Since the vamps can’t be trusted and Derek has started to add more member to his group, Jane decide to get her own team she could trust and then enter Eli, former ranger, good fighter and loving brother of a young adult Alex, on probation for hacking in official security system….the chemistry between them is instantaneous and really funny too since Jane act more as a mother than a boss bargaining junk food against shower^^;;. Both are really talented and a great addition to her team if she can win their complete trust and loyalty.

With a war on their door, trusting problems and some secrets to keep, Jane has really a lot on her plate.

If you don’t mind a girl that can’t make her mind, love actions, vampires as well as others creatures and humour too ^^ this is a series and a book for you ( to read in order)