Slowly things are getting back to normal but the last weeks put my body under heavy pressure and now i must face the consequences still i wouldn't change it since my dog keeps improving.

Today i wanted to share with you my opinion on the 3rd book in the Edie Spence series because Cassie Alexander does write and release books quite rapidly so i'm way, way behind already^^; ( at least we don't have to wait 1 year between each book^^) 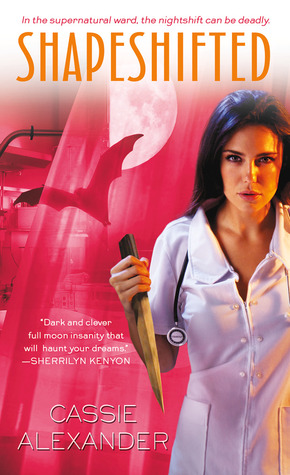 Nurse Edie Spence is once again called upon to save a life…and this time, it’s personal. Can her new community of zombies, vampires, and shapeshifters come to her rescue when she needs them most?


When Edie was fired from her paranormal nursing job at , her whole world came crashing down. Now she’s is once again shaken to her core. Her mother is deathly ill and there’s only one thing that will save her: vampire blood. But with the paranormal community shunning Edie, where can she obtain it…without losing her own life in the process?


Edie hopes to procure it at her new job at the clinic across town, where the forces of evil loom large. Vampire gang wars are rampant. Old underground enemies are rising to the surface. And Edie’s zombie ex-boyfriend has arrived at the scene—but is he the same man he used to be? And what should she make of the enigmatic doctor with whom she shares an unexpected connection? She’ll have to figure it out soon, because all hell is about to break loose—literally—and time is running out…


My opinion:
I’m definitively warming at this series,  it’s even better than that I Loved this book!. Edie is maturing, she is starting to see what is the most important without loosing herself..i could only appreciate her this time. She is suffering from her shunning and then worse she learn her mother is dying from cancer….i know first hand how for a child to learn one parent is dying is something terrifying…we don’t know how to imagine ourselves without our parents, we rely on them even if only emotionally and then we learn it won’t last….we are never prepared for that and I guess it’s harder for Edie because as a nurse she knows how it will happen…. It’s even clearer for her... thus the feeling of unfairness, the want to do something to help even if she can’t.

To be honest I loved the fact she could think more about it at first she doesn’t doubt her decision, vampires blood can cure her so she need it.. but after a moment she also see the consequences….and understand how selfish it can be….. forcing her mother into servitude isn’t a life… she would breathe but in which condition? Which state? I must say I was glad Dren kept his promise even if he made him sound as a jerk because really he was acting to keep his promise not to hurt. Edie needed to be told the truth even if it something she didn’t want to hear.

Also Edie is more stable…she isn’t sleeping around she can have lovers yes but she think about it now and I prefer responsible heroine.I thought that working in that hospital/ clinic was really a good thing for her, it has the stress from the job but in a positive way…. No contract on her head like before, in a way her soul is free. For the first time she think about her and it’s not easy so it’s a good thing in her case. Oki I was a little surprised she couldn’t believe in Olympio’s don at first, I mean after everything she had see she should be more open minded but I was funny and I loved the little phrases in Spanish…. I’m learning it so it was an interesting exercise. … I could imagine her opening a special clinic , even for supernatural, too without including shadows for example because after all…they do come to ask her help.

The plot was really well done and Cassie kept us on our toes, we could guess parts yes, predict some but at the end we were still surprised at how she created things. I definitively wants more and I do hope Edie won’t go back to her bad attitude, enter in the shadows powers or something like that. I loved to see more of Ti, Asher and yes even Jorgen….. I must say I’m really curious about what Anna will do after all she was shunned when Jorgen , at Dren’s order, came to her.. will that means Dren will have to pay?  I do hope he will be the one punished because Jorgen acted bad but he is paying a high price for his stupidity already.

It’s really becoming a series I enjoy more and more so I can only hope it will continue to be that way. If you love urban fantasy mixed with medical…..this is a series for you. (I do wonder if nurses, all, steal as much as edie^^;;)