Already February.. time is litteraly flying while i'm trying to remodel  the house to make it easier for my mother so the January wrap up will be up but another day ( i do plan not to forget those in 2016^^;;).

Today i'm sharing my opinion on another sequel i had in my pile from a favourite series of mine: Jane Yellowrock series focusing on her witch friend ( which make this oen perfect for not only one but 3 challenges^^) 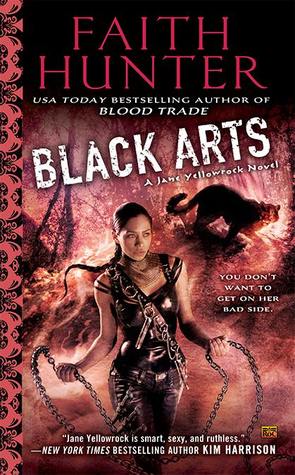 Jane Yellowrock is a shape-shifting skinwalker who always takes care of her own—no matter the cost...

When Evan Trueblood blows into town looking for his wife, Molly, he’s convinced that she came to see her best friend, Jane. But it seems like the witch made it to New Orleans and then disappeared without a trace.

My opinion:
Faith hunter really created a engaging world that you take pleasure to visit again and again....that being said  it also get more complicated with each installment so i do recommend to read this series in order.... i did and simply because  of the time i took between the book i was a little lost  a time or two during this story.

The plot was good and i really enjoying but there were a few things that got me disappointment with this installment.... first: the repetition... So far it has never been that repetitive and if the character Jane herself think it’s getting old i let you imagien what it is for the reader.... i can admit it was an important element but too much is too much. Speaking of “too much”.... i couldn’t stand Jane’s reaction to Rick anymore... after everything that happened  precedently i don’t see how she could be reacting like she is. I wanted to shake her until she found her mind again... and Beast wasn’t that efficient on that part^^. She can’t stay naïve like that it’s really too stupid!

That being said here were part i loved as well, Beast is as always funny and we want more of her remarks. I also really apreciated all teh allusion about jean Lafitte as you know i’ve learned a lot about him thanksto the series by Suzanne Johnson so having him cited here was a pure treat even if i’m not sure i would like to discover he is a vampire in Jane ‘s World... i don’t know why. Still the fact it played well with the New Orleans history was more than enjoyable ...and lastly...Angie...this littel girl isa real light in Jane’s universe but she is also giving her a lot of worries and it sound like it will only get worse as she master her powers more and more.

There were touching moments, some angsty one, some funnier so, when eveything is put together, it was a good read even if not my favourite and i definitively plan to continue the series.