Looks like Winter made a new attempt at settling down  as we have temperatures under zero for this whole week and perhaps will have some snow... quite a constrast with all the spring flowers already in full bloom.

On advantage of such a cold weather thoug is the pleasure we get when we can read a good book near the fire with a cup of tea ( or hot chocolate).....and when you are as busy as i get lately those small break and even more pleasurable.

Today i will share with you my opinion on an installment in one of my favourite series as i try to  alternate sequels and novelties this year ^^. Without more delay here is my view on Arvchangel's Storm by Nalini Singh 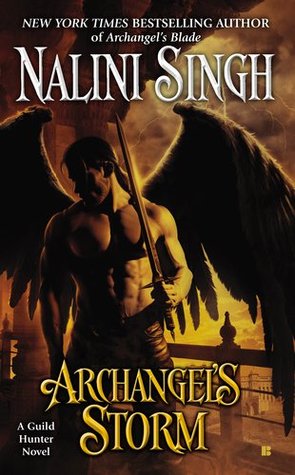 With wings of and an affinity for shadows, Jason courts darkness. But now, with the Archangel Neha’s consort lying murdered in the jewel-studded palace that was his prison and her rage threatening cataclysmic devastation, Jason steps into the light, knowing he must unearth the murderer before it is too late.

Earning Neha’s trust comes at a price—Jason must tie himself to her bloodline through the Princess Mahiya, a woman with secrets so dangerous, she trusts no one. Least of all an enemy spymaster.


With only their relentless hunt for a violent, intelligent killer to unite them, Jason and Mahiya embark on a quest that leads to a centuries-old nightmare… and to the dark storm of an unexpected passion that threatens to drench them both in blood.

My opinion:
This is a series i keep enjoying a lot as Nalini Singh always manage to spice up the  series' plot with little elements coming to enlighten the investigation and a lot more coming to show us how bigger and more mysterious it will be. I Love that!

Now that the plot running along the series , the " fil rouge" but each book has a main storyline as well and those are also captivating. I was always intrigued by Jason as we only saw from time to time a little and learned even more little. When I discovered he was the main character  in this book i had to get it without delay even if i wasn't that far yet in the series and I'm delighted i did get it.

Jason's story is really heartbreaking, he may be an angel of high power he is broken. We could imagine his past was hard but  not too that level or not that early since we know how precious children are in the angels' culture. I always loved his  relationship with Elena, while protective of Raphael, Jason wasn't outright hostile and  know i understand it even better.

So Jason is Raphael's spymaster, that we knew, however the extent of his talent  and of his means wasn't revealed yet. Discovering that an archangel's consort , Eris, is dead and having an idea of the disaster it could cause, he doesn't hesitate to go to the lion den, or the serpent den is more accurate since he goes to Neha, to try to calm things down by finding the culprit.
As an external agent though, he can't go freely so Neha requires a blood vow, a older practice, to bind him to her niece  Mahiya and as an archangel you can guess she has ulterior motives as well.

Mahiya can be a princess, she is treated as such in name only as Neha hates her and think of her as a tool only. However under the appearances, Mahiya is a dove in a serpent nest. Fragile but not without strengths she is biding her time until she can leave without being killed or worse. Jason isn't what she expected but soon she sees him as an ally because he is the only one giving her  credit and respect.

Those two are a good match and i really loved how they learned slowly about each other and how respect was essential in their relationship.

The investigation is really interesting and kept me turning the page to confirm my suspicions and to get more of Jason and Mahiya. Some chapters though focus on Dmitri and Honor marriage and aftermath. i loved to get more of those but at the same time i admit that at time i was so focused on Jason and Mahiya that  the other couple bothered me ( i'm complicated i know)

All together it's really a fantastic book, i still prefer Elena/ Raphael as a couple but  i want more of the seven as well so it's a series i will follow with pleasure)