This first week of January has been quite hetic for me already but not in a bad kind of way... just a lot of things to do so i kept rushing  and it affected my health of course but i'm already taking care of that ( no one wants elephant feet when humanshaped^^) so i'm trying to stay positive.

So far i've started by telling you which challenges i've entered for 2016 but who says challenge says books and it was time for me to start reading and give you my opinion on it.

I started this year with a book that was gifted to me by Roger ( thanks again!) and it was a delicious surprise so  here comes my point of view on Night Owls by Lauren M. Roy 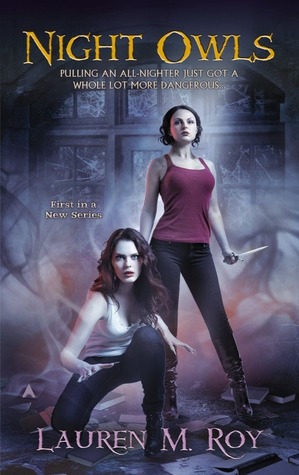 Night Owls book store is the one spot on campus open late enough to help out even the most practiced slacker. The employees’ penchant for fighting the evil creatures of the night is just a perk…

Valerie McTeague’s business model is simple: provide the students of Edgewood College with a late-night study haven and stay as far away from the underworld conflicts of her vampire brethren as possible. She’s lived that life, and the price she paid was far too high to ever want to return.

Elly Garrett hasn’t known any life except that of fighting the supernatural werewolf-like beings known as Creeps or Jackals. But she always had her mentor and foster father by her side—until he gave his life protecting a book that the Creeps desperately want to get their hands on.

When the book gets stashed at Night Owls for safe keeping, those Val holds nearest and dearest are put in mortal peril. Now Val and Elly will have to team up, along with a mismatched crew of humans, vampires, and lesbian succubi


My opinion:
For this one it’s actually the title that caught my attention first ( it’s “owls” after all^^;;) then the blurb even if the part with the succubi had me hesitant at first, them being secondary characters i couldn’t resist so when Roger surprised me by sending me the books already released in this series i was over the moon.

Night owls didn’t disappointed me at all, i admit at time it was a bit confusing as the author switch of characters point of view and setting  when we still don’t know all the characters yet but if you don’t give up for that it gets better and better after each chapters.

I really loved  the bunch of characters so different and at the same time wanting the same thing: a quiet life ( and obviously not getting it) I must say that i prefer Cavale a little bit as he sound to be the most reasonnable from the group. Elly is young and unexperiencied in social relation which make her a little to straight forward but we get to like her netherless... i’m still a little unsure about her though...she seems very sharp ( seeing that strangely they all came to that city without  speaking to each other about it and at the same time completly closed up and obtuse when it comes to her own past) . I do like the magic  Elly and Cavale are using, they are a combinaison of fighter and magic user and they don’t exactly use the same amgic either so i would love to read more on that as well.

Val is a vampire and and booksellers ( yes the fact that there was a bookstore is another thing that sold me the book^^;; i can be predictable yes) , she was ( still is) a warrior , called hunter in that world, but after a tragic past event she wants a normal quiet life with Chaz her human follower, so loyal and master of his own mind. She doesn’t want to take part in vampire feud and politic ( really after living so long it’s a wonder why they still go at it like that).

The rythm is just the one we need to be kept inside the story and not lost , the action is fast paced but we do get info on each character which is really welcome... so while this isn’t fully original it’s a very enjoyable story.
I really loved that the end was only a kind of cliffhanger making me smile, wanting to read the next book but at the same time if it hadn’t been possible it wouldn’t left me in anguish state as we can imagien how it will go as well.

If you want a good urban fantasy debut you can try this one!

How are your first reads of the year so far?