Written in Red (The Others 1 ) by Anne Bishop

A new month has started and i summer isn't far ( even if you can't tell by looking throught the window)...i've joined a challenge to read paperback during the summer ( will tell you more in my wrap up soon)  and i decided to start with one i received for my birthday after oogling it for far too long, a new author to me, new series but one i do plan to follow up as soon as possible 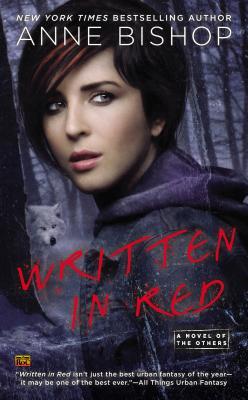 No one creates realms like "New York Times "bestselling author Anne Bishop. Now in a thrilling new fantasy series, enter a world inhabited by the Others, unearthly entities--vampires and shape-shifters among them--who rule the Earth and whose prey are humans.
As a "cassandra sangue," or blood prophet, Meg Corbyn can see the future when her skin is cut--a gift that feels more like a curse. Meg's Controller keeps her enslaved so he can have full access to her visions. But when she escapes, the only safe place Meg can hide is at the Courtyard--a business district operated by the Others.


Shape-shifter Simon Wolfgard is reluctant to hire the stranger who inquires about the Human Liaison job. First, he senses she's keeping a secret, and second, she doesn't smell like human prey. Yet a stronger instinct propels him to give Meg the job. And when he learns the truth about Meg and that she's wanted by the government, he'll have to decide if she's worth the fight between humans and the Others that will surely follow.


My opinion:
Awesome! I have been recommended this book since it was released and it caught my interest but somehow it was not a priority since it was not easy to get them either… however the want has been growing with each release when I saw my friend enthousiam…I was really lucky when one of them decided that it was time to step in and offered me the first book “ Written in Red “ for my birthday.  I could not be happier, not only this book is as good as I was told but it’s even better. Oh it’s violent, there are a lot of blood and deaths but it’s not a dark book either.

Anne Bishop created a complete new world with its own rules, all kind of creatures and she was really thoughtful. This world makes sense so much in fact that it seems like only being a foreign, dangerous, but not so far country. In this world the deity created human beings but also others, called “terra indigene”, that includes shifters, vampires, elementals and so many others, some we are not told a lot about it yet. The particularity in this universe is that, for once, it’s the others who are dominant; humans are seen like invaders, preys and others only allow them some lands but at soon as troubles arise, humans are simply disposed of… ( to put it lightly^^). Some others have decided to keep watch on the human, learn a little from them and they created cities ( courtyard, part of the city, where only others live and where only their rules apply) with shops, restaurant etc… in the Lakeside courtyard, some job are open to human and some have access to restricted place  for example to the bookshop (;))… to be functional courtyard receive shipment from abroad but delivery can be difficult if you think you will be eaten when delivering a package, so the human liaison was established….to be a link between human  delivery men mostly) and the resident a little like a postman but so much more and of course this isn’t an easy job as others aren’t entrusting anyone with info about them.

When Simon, the leader of the wolf and courtyard, see Meg for the first time she isn’t looking much…nearly frozen she is intriguing him because she doesn’t smell like a prey….upon instinct he decide to hire her not knowing she fleeing from very powerful men using her to make profit until she dies from it. Soon frustration evolve in something else and the whole community start to get attached….and others protect fiercely who is their.

Really it was simply perfect, the world, the pace the characters building, I just want more!. The plot is wonderfully constructed and we get surprises along the way, the choice of creatures and their specificities is astounding . It was fabulous and it’s too hard to resist the cute Sam , really too cute  my heart went for him along the way ( and for Hurricane). Simon was amusing when he tried to be human polite and just ended frustrating or insulting his clients. Meg with her innocence and kindness wins the reader over in mater of minute and secondary characters like Henry, Jester, Nathan, Jake and the humans ( Merri jean, Ruthie, Monthy) were fantastic in their own way and we do want to see more of them ( what are the crows building?).

Really if you love urban fantasy and haven’t gotten this series yet don’t hesitate any longer, you won’t regret it! For me, I will try to get a copy of book 2 ( and 3) as soon as I can manage