Hi!!
i promised you one review this week so i'm glad i did manage to give you and even better one for a book that i enjoyed a lot!! Thank you Carien!!! 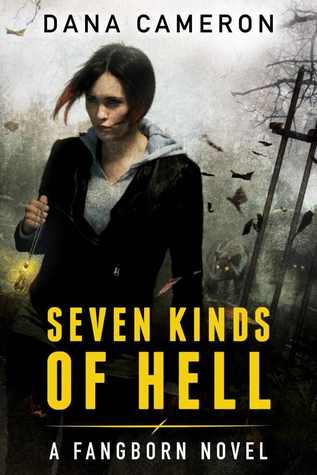 When archaeologist Zoe Miller's cousin is abducted by a vicious Russian kidnapper, she must come to grips with a haunting secret. Unknown to even her closest friends, Zoe is not entirely human. She's a werewolf and a daughter of the "Fangborn," a hidden race of werewolves, vampires, and oracles.

Zoe's attempt to rescue her cousin leads her on a quest for artifacts—including Pandora's Box, an object of world-ending power. With the fate of humanity in the balance, Zoe will be forced to renew family ties and pit her own supernatural abilities against a dark and nefarious fo.


At once captivation, deftly worded, and character-rich Seven Kinds of Hell expands vampire legend and werewolf noir in both intensity and charismatic bite.

My opinion:
Wonderfully original!  I absolutely loved this book and I can’t believe I had to wait so long before discovering such a pearl. Dana Cameron has built a world so unique and yet so easily understandable that we are swept by the adventure and can’t let go.

If you love history , even just a little, and love suspense this is a book you have to try, no, don’t fear it’s not a historical novel by all means but Zoe is an archaeologist and thus she is confronted by the past, visit ruins and such but the talent of the author was to add that reality ( of place, some history) with a touch of paranormal, creating artefact that have been hidden sometime sin plain sight sometimes not….for her the representation of creature mi human-mi animal ( think about Anubis for example and all the others in nearly all civilisations) were in fact little proof of Fangborns’ existence. Hidden in plain sight it was way for them to leave a reminder. Really it’s so well done that we can guess all the works that came behind the story, all the necessarily research that’s fabulous.

So In this universe, among human live Fangborns…who can be vampires, werewolves, oracles, snakeweres etc, each of them have specialities( like hunting, healing, predicting etc) but one thing in common, apart from a few human their existence is secret and their goal is to fight true evil. When an evil human is on the verge of doing something they can scent him and immediately their instinct calls them to interfere to protect the innocent and destroy the evil.

Zoe doesn’t know she is fangborn, all her life she has been on the run with her mother hiding from her family but at the same time hiding what is happening to her. When adolescent she started to change to have strong urge and found herself as a wolf…afraid she thought she was crazy and hid even more. Now her cousin, Danny has been kidnapped and she is told she is fangborn….no real time to adjust to clock is tickling  and she must find some artefacts to save him, meeting enemies but also new allies along the way across and .

The pace is quite rapid and the tension building, we learn a little more about Zoe and the fangborn but there are still a lot left to be discovered and we do want more after the cliffhanger( not in a too critical moment thankfully). I really do want the next book as soon as I can because this is a series I recommend without hesitation, it’s a fantastic, original and captivating urban fantasy