i'm posting this a little later than i hoped but my top priority at this moment is my dog. I had to go to the vet in emergency ( bad friday 13th) and the results are really, really bad. So, Right now i'm doing all i can to reverse the situation and stop the renal failure while keeping off the pain. Thankfully he has started to take his medecine without a fight but he isn't eating a lot right now and i can only pray everything will work and that he will get back on his pawn  healthy and happy  as soon as possible.

Anyway i did manage to read, it just took longer^^ so today i continue with a series i started not too long ago but quite enjoyed and i wasn't disappointed so let see what i thought of Grave Dance 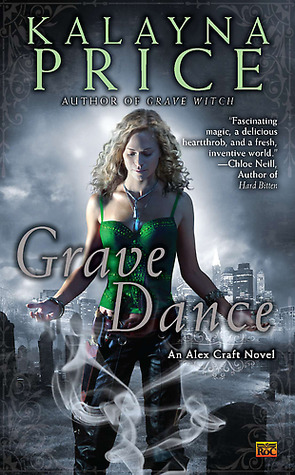 After a month spent recovering from a vicious fight with a sorcerer, grave witch Alex Craft is ready to get back to solving murders by raising the dead. With her love life in turmoil thanks to the disappearance of Fae Investigation Bureau agent Falin Andrews and a shocking “L” word confession from Death himself, Alex is eager for the distractions of work. But her new case turns out to be a deadly challenge.


The police hire Alex to consult on a particularly strange investigation in the nature preserve south of . The strange part: There are no corpses, only fragments of them. A serial killer is potentially on the loose, and Alex has no way to raise a shade without a body, so she’ll have to rely on the magic of others to find leads. But as she begins investigating, a creature born of the darkest magic comes after her. Someone very powerful wants to make sure the only thing she finds is a dead end—her own


My opinion:
This series is really getting more interesting after each book and I appreciate Alex more and more. She is an interesting character and I haven’t read about a lot like her. Yes I was hesitant before because this is a series about a witch making ghosts  and souls speak, with a death collector ( soul collector being more appropriate term) so I feared it would be really dark but I was wrong.

Oh this world is dark yes and there are some dark moment, violence etc but the focus isn’t on that… in a sense even the death doesn’t sound as terrifying either. Alex is respectful of the deceased; she doesn’t use them as general rule. I love her romance with Death, the soul collector… oki their relationship is strange and quite forbidden but it sounds sincere and he is protective of her. Falin, the fae, who appeared in book 1 can be gorgeous… and sometimes help her I don’t trust him ( yes in this story he gets some bonus point but if i could pick Death would get the girl)

This second book take place a few months after the events of book 1 in which Alex discovered her true nature… those events were not without leaving traces physically and psychologically… Alex is discovering new powers and her old ones don’t act like they did in the past… sometimes they seem more potent sometimes more unpredictable. In any case she knows she has to keep her head low to keep her secret.
When hired to look at a crime scenes, she discover that she can easily see past fae glamour  which could be dangerous for her but at first she doesn’t realize it’s glamour and tell a little too much. Also her fae nature is starting to affect her more deeply while she is still completely ignorant of their rules and of the numerous dangers.

I must say that the plot was really well twisted and I even had doubts at some moment^^; like I said Falin did won some points but I still don’t trust him. Alex will learn a lot about faerie and makes a few more enemies along the way.

This book doesn’t end on a cliffhanger at all but I must say I’m impatient for book 3. If you love Magic, investigation, suspense and romance this is a universe you should appreciate and more.