i'm really posting late ( or early in fact since it well past midnight) but i didn't want to make you wait longer so  now that i have a few minutes of calm i'm sharing with you my latest read.

First, i wanted to thank you for your thoughts and prayers for my dog, he isn't out of danger yet but i got the results of his new blood analysis and that show a little improvement, enough that the vet decided a new traitment ( injection during a week) to help him fight his infection. he was energic to go out for a walk but for the last days he wasn't eating at all so he couldn't oral medecine, this should help ( he needs to eat, he lost 2kilos in less than 2weeks). i'm still terrified for him but i don't give up i will do all i can to make him better so thank you for your support.

Now what did i read?  A new series... at the moment i start more than i follow up but it has been a long time since this one tempted me so it was the perfect moment to indulge and take my head out of the problems for a bit.. the result was simply addictive and i will read more by this author in a near future . Here comes my opinion on " Accidentally in Love with... a God" 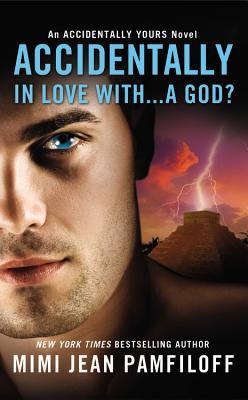 In real life, he’s an enigma. Maybe just a teensie jealous. Definitely overbearing. He’s also a voice only she can hear.

So who or what is he? He won’t say. But if she wants to be free, to be normal, Emma will have to trek to the jungles once ruled by the Mayans and find the forgotten ruin holding the answers.


However, the ruthless deity she’s about to unknowingly unleash on the modern world, might not be so easily extracted from her life. Bottom line, he’s got enemies, and now, so does she.


My opinion:
Fantastic, I really loved this one.  At first I was intrigued because the summary spoke of Mayans and I’m quite attracted but story set in that time of with element from those cultures ( Mayans, Aztecs etc)… a remembrance of my love for the anime “ Les merveilleuses cités d’or” ( the old version ( ’80) with the after little explanation for historical or geographic elements)

Yes the story isn’t fully on those elements but Votan  later called Guy is from there ( and other cultures^^;;) and part of the story is in the jungle so  for me it was more than enough. Add to that a really interesting plot, secondary characters well done some intriguing like Cimil  ( really energic goddess) or Gabran the chief who loves to annoy his god ,some irritating like Tommaso  ( can’t understand how emma can trust that one he is so “off”). The universe is really well thought and well described, right at the beginning you get insight about the Uchben and later  more information come to complete the description, Votan explains right at the start how “gods “are working so all that make the story one you can really easily get immersed into.  I was hooked right from the start and couldn’t stop turning the pages.

After speaking so much about the setting and the secondary characters it’s time to focus on the main couple. First, Emma, I quite liked her she is funny, can make stand up for herself and don’t let Votan/ Guy bully her. She is energic but more important she has a wonderful heart. Since little she had someone amle speak to her… first like a friend later like an arrogant infuriating companion. She doesn’t know why but it has started to be too much for her and she wants to be free or she thinks so.

I loved to see her interactions with Votan and it was really funny.  Now  she also started to be a little infuriating when she couldn’t make up her mind about being free or not, trusting him or not she was like a yoyo in the second  part of the book and I just wanted to shake her a good time and stop whining.  Still  , I’m not sure how I would have reacted either.

Votan… I was immediately vouching for him^^;;, hard to explain why but in all mythology ( greek, roman, norse, mayan etc)  I’m not against the god of death and/or war….more than often in fact I pity him. It’s not a easy job and it makes you be seen as bad but there isn’t life without death to start with ( even if it seems unfair and that we hate it  it’s a fact)… as for the war…. Battle with honor are different from simple violence and while I dislike (euphemism) the war in general I know humans won’t stop, no need for a higher being to have a hand in that.  It’s not my favourite deity but like I say I pity the one with that task because I think he ( she sometimes) must feel really alone and  misunderstood. Votan did share that trait. OH he is a fighter, a warrior and one really talented but he takes no real pleasure on taking care of the bad souls…; he just do his job. Later in the story we will learn that it’s even more complicated than that.

While my heart was on Votan getting the girl I still was annoyed from time to time with him because he is the arrogance itself and while wanting to protect Emma….he is so out of place. He wants her to feel angry to make her ready? Perhaps it works with soldier but not with a lover and treating her like a child because mortal and fragile doesn’t help his cause… he was quite clumsy in a way that was also touching.

Really there is only  1 or 2 details that bothered me and it’s the reason I can’t give a 5/5 but it’s barely since I loved it so much despite everything. First I took some times to understand why the narrator suddenly called Votan Guy…  thought I shouldn’t have because with a French pronunciation it’s a perfect traditional  first name^^;;), it’s logical and explained a little after but at first it was confusing. The second thing that bothered me? The last page..; really I could have done without it since it set a cliffhanger and I’m not sure book 2 will start where we left  these characters and it frustrates me

That being said this story is really funny, with endearing characters, romance, a lot of action and some elements from less know cultures and mythologies so if you want a original story with those elements you must try this one! I can’t wait to start on book 2 and get the others already released. You won’t be disappointed!