A new month has started and it started on a really positive note for me....i was asking to review a book i wanted to ( Thank you Carly!!) and i LOVED it!, i finished it in matter of hours so i had time for another one that i enjoyed as much, i also put some order on my shelves but on that side i'm only at the beginning ^^.

So i'm really happy and i didn't want to make you wait so today i'm sharing with you my opinion on "Finding My Faith" book 2 in the six saviors series by Carly Fall. If you rememeber i shared my opinion on the first book "The Light Within Me " earlier this year for the monthly topic " alien" in paranormal romance. I enjoyed it and wanted more and i got my wish granted....believe me i don't regret  at all!! I've become addicted to this series.

Now let see what i thought of it in more details: 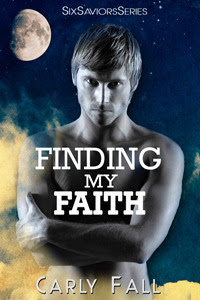 Growing up in a small town, Faith Cloudfoot’s life was spent playing in the forests surrounding her house under the protective eyes of her father, and learning about the legends of her Native American heritage. Yearning for more out of her life, she moves to at the age of twenty-three where she is kidnapped and almost killed.

Rayner has a special ability, one that weighs on him like a curse. He can see spirits trapped in between life and their final resting place. Because he can’t do much to help them, he studiously ignores them. He concentrates, instead, on working with his fellow warriors to right the wrongs caused by the evil criminals from his home planet.

When Rayner sees Faith in her spirit form while investigating a lead in , his attraction to her is immediate, yet he follows his own personal code and ignores her cry for attention. When he realizes that she may be a stepping stone to getting him home to his own universe, he engages Faith and begins to use her as a means to an end: going home.


As the attraction grows stronger, Rayner finds himself breaking all sorts of self-set rules, as well as the code of ethics set by him and his fellow warriors. When Faith nears death, Rayner realizes that he must do everything in his power to save her, because if he doesn’t, he may just lose himself.


My opinion:
LOVE it! It was finished in almost 2hours so that said how strongly I was immersed in the story and enjoying it… after reading book one “the light within me” I did have a soft spot for Rayner and learning more about was simply too good.

Rayner was quite a bitter character with only his job in mind… from all the warriors he is the one who wish to return to SR 44 the most and he does works for it even if he means flying somewhere else on mission (and he hate flying) In fact, he is one that suffer the most in my opinion, his power sound like a curse for him: being able to see and speak to spirits trapped but not being able to help them has taken his toll on him. In fact he only succeeded once and thus he tried to ignore them. It’s really the opposite as how he was before.. as a child he was carefree, living in the forest, respecting the nature and spirits  with his loving family. Rayner wanted some adventures so he left his forest for the city where he met Cohen and Hudson, fellow warriors, and decided to enrol in the military to see the world.
However he did promise his mother to come back and that what is keeping him strong and determined… he wants to go back and get once again the warm feeling to belong.

I could only smile at how similar it was to Faith growing up…she too lived in the nature with a loving family but took pleasure in exploring, taking risks and in the end by leaving for the city where her life took a drastic turn. The difference between them….Faith hasn’t lost herself yet, she still dreams, hopes and laughs while Rayner forgot it. Both understand the spiritual world and respect it despites some doubts sometimes, like Faith who doesn’t believe how special she is and the prophecy she is supposed to accomplish.

They are simply perfect for each other and I enjoyed how they had to discover it and then had to make it works, faith really needed her inner strength to makes Rayner understand and see what was under his eyes. I also loved her parents how insightful they were, how open while still protective. They are some really steamy scenes yes but deeper feelings and emotions are predominant in this one.

While the action and romance are there, some humour too,  in my opinion it was also more profound, the author make me think and feel things  in the character’s perspectives and I was completely hooked and they grew on me. It also means that I was even more angry at the villain.
The author closes the story on a happy note, the characters have their happy end, but this being a series we know it can be temporary, but the investigations isn’t complete, yes faith is saved but the culprit, even simply his motives are not sure for our heroes…and that the only reason this book don’t get the maximum score….i don’t like when the bad ones go off easily, the more evil they are the more I want them to suffer.. I think I’ve become really addicted to this series at this point and next book will not be in my hands soon enough.

If you want an excellent paranormal romance with a some deepen meanings fitting in the main storyline, a book that can work as a stand alone , but you wouldn’t want to miss book 1, then try  Finding my Faith and the Six saviors series… it’s a must read!

and book 1 is still free here for those who are just discovering this series. Enjoy!