Time and Remembrance (Kiss across Time 7.1) by Tracy Cooper-Posey

i'm busy trying to create some christmas gifts ( and finishing them on time^^) but it's also a special year with a lot of commemorations ....100years after the end of WW1....and i wanted to share with you a novella set in that time simply because no one should ignore it existed and if we need fiction to remember it's still better than forgetting. 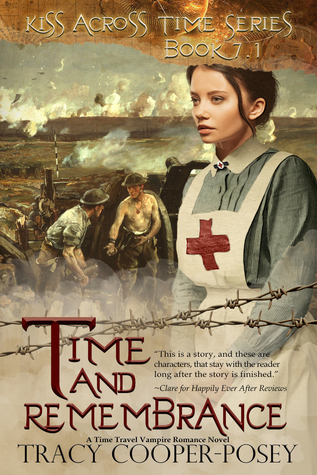 A special story marking a moment in history…lest we forget.

On the one hundredth anniversary of Armistice Day, Jesse Hall, United States Marine and unsung hero, finds herself among a group of time-traveling vampires. She has been directed there by a century-old letter from her great-grandfather, instructing her to introduce herself with the phrase: “I’m not wearing a red shirt.”


So begins a dash through time to save a man in the very last minutes of the Great War, which in turn will save eight million other lives…


My opinion:
World war 1 isn't something new to me, i have read quite a lot about it since i had family impacted by it., however while we are celebrating the 100th of its end it's true that less and less people have an idea of the nightmare it was. No matter the side, no one left unchanged.....and while outside wound were horrible, inside hidden one may have been the worse. of people see it as not mattering anymore.

Knowing that, when i heard about this novella even if i didn't read the rest the series i wanted to discover it and i really appreciate all the research the author did to writes this story. yes it's a paranormal novella and in these time we probably do need this way to deliver the message but that's the essential : that we never forget.

For a first jump into the series it can be a little confusing as we don't know the main characters but we easily get past that as WW1 is really the main focus. I really loved this novella so if you want a novella just to make you remember a little this is the perfect one ( and you will perhaps want to learn more after  as well)