I wanted to post this a few days ago but i came accross technical difficulties added to bad news that took me down ( since then a wonderful news changed the whole situation thankfully) so i'm late and i'm sorry for that. I do plan to read more before the end of the year so you will get more posts but for new i must tell you about a new release in a series i follow with a lot of pleasure: The Peacesmith series by Carly Hansen 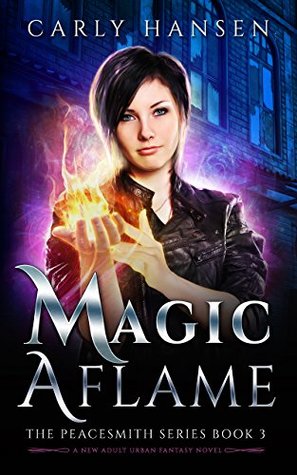 The third book in a gripping, action-packed fantasy series readers are describing as "enchanting" and "a breath of fresh air".

When Fenix's fellow gang member Twain sneaks away and gets trapped in a dilapidated building, she races off to rescue him.

But she's not the only one seeking her fallen colleague.

Enemies stewing with grudges against Alda and the gang are out to exploit Twain's misfortune.

On a collision course with powerful forces hell-bent on revenge, Fenix has to draw on both her emerging magical powers and her fighting skills if she's to stop their deadly schemes. But the price she has to pay is high and she finds she must decide how far she'll risk her own life to save a friend.

A series of quality....it's not always true that  series keep the same level of quality in the writing and in the content but so far with this one i haven't been disappointed at all; it still really well written and the suspense is still there making us want more...it's even slightly better i would say.

Fenix is maturing but not too quickly which is good seeing her age and the  time between each book, poor girl keeps having things throw at her and she sure adapts better that i would. She is conscious of her responsibilities but she is also able to ask for help when needed and i really loved that about her. More importantly she is very loyal.

i loved to see her ready to fight for what she believes in and at the same time preferring if other solutions were possible.  We learn a bit more about her powers in each book as she is discovering them or learning from Gaius however i would said that this time we do see her practice and  start believing in her powers more but we learn more about the villains for once....

Micha the vampire is still trying to be a good guy but he has some difficulties which kind of make me even more curious about what will happen. He does open more to Fénix as well - something which she still should do-

This time we are confronted to Alda big enemy who allied herself with Micha's so a war is brewing , lot of action and fight and in the middle of that  the same two police officers are trying to get a grip of what is happening ( for one at least the other is more on a revenge path) while completely blinded by their short views or misconceptions.

it's really a promising urban fantasy that i take pleasure reading and next book will be one i will look forward to.

Disclaimer: All opinions are my own and i voluntary reviewed this book. Source: a copy in exchange for an honest review
Publié par miki à 04:29