so while i struggle with facebook mess ( really i would never have thought them to be so uncompetent!) i'm not forgetting that i do have some reviews to share with you so... here comes my opinion on Bear's Shadow second book in the Vendetta series that was released last week. 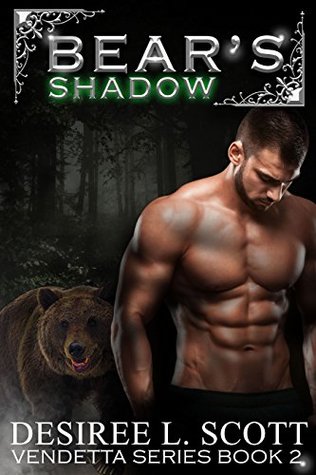 Nikki Calhoun is on the run, fueled by terror of the shadowy world she had married into. Desperate to survive and nowhere to hide, Nikki turns to the wolf shifter pack of her childhood but it’s hard for her to trust anyone, even the people closest to her.

Enforcer and bear-shifter Bret Axel receives a call from his cousin who manages his nightclub about suspicious activity. After obtaining the approval of his Alpha, he travels to . Two nights later, screams of a woman shatter the silence of the dock and with the help of his cousin, they save her from being killed.

A twisted tale of hunter and prey, two worlds collide as Bret falls for the human and then struggles to convince her that they are meant to be together. It’s up to him and the Crescent Ice Pack to get to the bottom of the brutal acts of one man. Will Nikki survive the wrath of her estranged husband or will the murky world of Edward Calhoun destroy her and any who try to help?

My opinion:
This was a very good second instalment, after a good book 1 i'm always a bit afraid in case book 2 wouldn't be as good but it's not the case at all. I loved  it even if it's not a favourite of me.
This story is a lot darker and violent, more than Crescent vendetta which wasn't light either....Nikki has suffered a lot and is terrified...not without reason but thankfully for her she still has friends...shifters friends and Samantha is determined to help  even if it means calling all the pack. I loved the fact she didn't simply got over it..after years of suffering like that it makes sense that she needs time to trust again.

Bret was a perfect gentleman, i loved to see how protective he is even if it's not his mate ( but with his mate he is even worse) he is giving her as much time and freedom as he can while keeping her safe and that's not easy when you are a bear. Also i appreciated that he didn't hesitate to ask for help.

We get to learn more about the crescent pack ( very open minded pack) and we find characters discovered in the first book with joy but this could be read as a stand alone too as we do get info from what happened in the past but this book focus more on Bret and Nikki so it would work well even if reading book 1 first give a deeper insights on the reactions the pack has. And we get a bit more info on !!!( i really want to discover more about him)

The action is fast paced and ambiance is dark, there are touch of humour and Nikki and Bret relationship is building step by step....However i felt like some element didn't ring true or were missing... i didn't understand why those saved were not returned to their family ( if not say they are orphan, alone or anything).. oki it could be protective measures but why not write it then...then... i didn't feel like the pack was pursuing things like they should...after book 1 when drug was used they are not attempting to find where it was produced to make sure none is left....also for shifters they are a bit too easy to kill ( i mean if important in the pack hierarchy they should be stronger than that in comparison to mere human even if they have a twisted mind)... characters can die of course i don't like it but when it make sense it's okay in this version... it didn't felt right at all....

Also Nikki's husband, the big evil man doesn't know what the pack is even after having them under surveillance....sound even stranger.....

Disclaimer: All opinions are my own. I received an eArc and i voluntary  choose to review this book
Publié par miki à 01:34