Sorry to post this review so late this week, lately i have been having some difficulties to  keep up with my planned schedule, i will do better.

Today, i'm sharing with you my opinion on the first book in the Descendants series by Melissa Wright. I've been eying this book for age and i even got the ebook  when it was free a long time ago so it was in the digital TBR pile and when you know me you know that the pile that takes me the longest to tackle. What can i say, i'm a print book girl ^^.

Fortunately for me,  the author organised a contest for her latest release during the holidays and i found myself delighted to receive the long awaited print copy of  Bound by Prophecy.... strangely it was read a lot quicker ;) 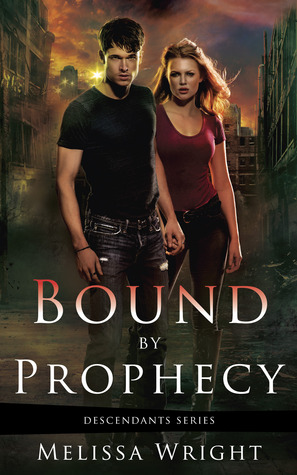 Twenty-two-year-old Aern is done watching his brother destroy the only thing that matters. He never wanted to take Morgan’s place among council, never wanted to rule their hidden world. But when the key to the prophecy is found, a young girl named Brianna whom Morgan will destroy, Aern knows he has to take action.

What he really wants, is for things to go back to normal. But now he’s kidnapped a girl, and his brother’s men are after him. His only hope is to join with the Division, but they have plans of their own, and it’s the last thing Aern is willing to do.
Emily just wants her sister back. She doesn't care about the prophecy, or realize what’s at stake. But when she goes after Aern, the truth of the matter uncoils, and Brianna isn't the only one who’s in danger.


Suddenly, they’re at the center of a secret war, and unless they can work together, they’ll both have a sacrifice too big to make.

I had my eyes set on this book for a long, long time before i finally got the opportunity to read it so i had hight expectations but i wasn’t disappointed. The writing is fluid and the plot well thought even if in the beginning i was a little lost i must admit, i easily  got immersed in the story following Aern and Emily once the author revealed tibits of their pasts.

Aern is courageous and determined, he grew up  knowing he would play a role for his people and always he wanted to protect them even if it means to be the one suffering under his sadist brother. Brother, Morgan, who is a real lunatic with only one goal:  control the universe! Aern has values and he fights for them.

Emily is the same, her mother told her a lot of things when she was little but the main was: protect your twin sister. She has learned things about Aern ‘s people but never really trusted her mother so she only has partial info, some elements she remembers. Still she wants to protect Brianna and is ready to fight and take high risk for that. It’s one of teh reason she accept to follow Aern at first not trusting her growing feelings.

I liked to see them come to terms with their childhood and what they were told and finally starting to make their own decision.

There was some violence in the book  for sure but also some romance and a lot of action.  I’ve saw that an omnibus exist for this series and i do think it’s a good news because while this book doesn’t end on a cliffhanger per say,  i think the story would gain from being in read in once sitting.