Words that bind by Ash Krafton


It's not usual that i share with you my opinion on a book on a Sunday... but this time is a little special.... you see i did want to read this book as soon as i learned of it's existence for once because i have the other series ( the Demimonde series) from the author on my wishlist for ages and  it sounded good and original ( too tempting to resist).

Sadly being sick with really strong headache i had to postpone reading a little.... BUT you see the book is actually in promotion... for less than 1 dollars if you are in the USA ( and for europe but if you use all romance)...
i really wanted to share that info with you  but it's better if the book tempt you also for the content not only the price so today i'm telling you what i thought of " Words that bind" by Ash Kratfon 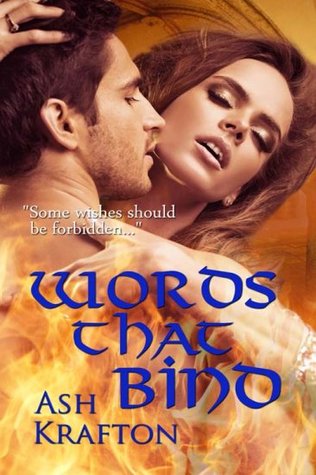 Social worker Tam Kerish can’t keep her cool professionalism when steamy client Mr. Burns kindles a desire for more than a client-therapist relationship—so she drops him. However, they discover she’s the talisman to which Burns, an immortal djinn, has been bound since the days of King Solomon…and that makes it difficult.


Ethical guidelines are unequivocal when it comes to personal relationships with clients. However, the djinn has a thawing effect on the usually non-emotive Tam, who begins to feel true emotion whenever he is near. Tam has to make a difficult choice: to stay on the outside, forever looking in…or to turn her back on her entire world, just for the chance to finally experience what it means to fall in love.


My opinion:
Last year I’ve been learning of the existence of a few book including djinns and I got to read some but not that many ( 2 only) so when I learned of this one with a Djinn as main character I really wanted to read it especially since I do hope strongly to read the other series of this author on my wishlist for too long.

I’m really not disappointed. This story is well written I smiled, I laughed I even cried at some moments as it was a whirlwind of emotions and I was captivated by the originality of the concept.

But let’s see more in details.  First the female main character: Tam…she is psychologist, working with emotions is for a her a way to study them…she can understand her patients on a calm logical level because herself can’t feel the emotions. She is that way since her childhood so she learned  to act like she has them but deep down she is not feeling and it’s something she regret. When I discovered her problem it made me think about Shaw from the “Persons of Interest” show.. she has the same problem but because of something that happened to her later so in comparison she knows emotions she just lost the way to connect to them. In a sense it helped me to imagine Tam’s life more easily…and I really could connect with her.
Tam is a kind person, apparently cold because of her “problem” she is still attentive and she is loyal… trust is really important to her. She also has the powers to see things other can’t.
We do learn about Tam situation right at the beginning which I think was a intelligent manoeuvre to help us to understand the impact Burns has on her better and quicker.

Burns is a Djinn…more precisely it’s a fire elemental, he was bound to Salomon’s ring and now longs to be free by reclaiming his talisman. His quest lasted millennia but he finally found Tam and he is sure she has his talisman so he decides to contact her since she is bound by confidentiality.  He never expected to find a human woman able to resist him and able to surprise him.  The fact Tam is so logical even with dealing with him despites everything he shows her has him entranced .But Burn is its element like fire he can be unpredictable calm one moment in frenzy the next…he has tantrums^^ and anger easily….that made me smile as much as want to  strangle him sometimes.

While trying to make Tam give up his Talisman; Burns help her discover magic and a totally new world….he also opens to him like never in the past and as strange as it is for Tam…he makes her feel… before him the only time she experienced briefly emotion was in her dreams, with him it’s surprise after surprise and they slowly fall for each other.

The quest for the Talisman has some really good twists and i was happily surprised. It’s not complicated but we are lead on false tracks or we learn news elements that makes us doubt our first opinion so I really liked how it was done to keep us captivated by the story as well as the romance.

Now I loved it but there are still little details that make me not to give a 5…. Perhaps it’s due to the fact I’ve read this while I was just recovering and perhaps my heads was not at his place all the time but for example I’m curious about to who the “other” door was, or why Burns say Lily can see him…. Did they meet? Did Lily met his enemies first?...perhaps it was said I missed it but… who took the decision to make the special ceremony? Was it something planned by Solomon to those he entrusted or something done against what he would have wished?  Honestly  it’s because I’m really into detail that I have those questions and I will reread the book happily to see if I missed something but it’s why I give only a 4,5 and believe me if you forget those you will be immersed in the series and not think about it at all

I do recommend “Words that Binds” if you want a good paranormal romance with a good dose of originality , romance, some humour and emotions you keep you on edge until the last page.

and if Words that Bind tempt you as it did to me the ebook is on a very small price until the 23 January so hurry at grab it when you can you have nothing to loose^^ here is some place you can find it but you have more on her blog.