Review Like Silence ( the others 6, World of the Others1) by Anne Bishop

There are some books or series that make such a strong impression on you that  you hesitate to try the spin off or sequels.... i absolutely loved "The Others" series by Anne Bishop ( i have it in Hardback and paperback^^ , french version and english ones) i even reread it several times  which is not sometimes i do that often or so soon after a first read....

When Lake Silence release part of me was happy to have more of a universe i came to enjoy a lot but i feared i would be disappointed because it was not the usual cast of characters i've come to love so i did get the paperback but somehow i did not dare reading it yet....time flow and it was still on my tbr pile when  a friend send me a copy...-now that's something i absolutely don't mind when i have a favourite book having two copy can be great especially if book get borrowed or read too often - but i realized it was time i gave it a try  and now i just regret having waited so long! 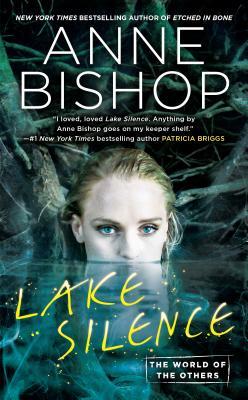 In this thrilling and suspenseful fantasy set in the world of the New York Times bestselling Others series, an inn owner and her shape-shifting lodger find themselves enmeshed in danger and dark secrets.

Human laws do not apply in the territory controlled by the Others--vampires, shape-shifters, and even deadlier paranormal beings. And this is a fact that humans should never, ever forget....

After her divorce, Vicki DeVine took over a rustic resort near , in a human town that is not human controlled. Towns such as Vicki's don't have any distance from the Others, the dominant predators who rule most of the land and all of the water throughout the world. And when a place has no boundaries, you never really know what is out there watching you.

Vicki was hoping to find a new career and a new life. But when her lodger, Aggie Crowe--one of the shape-shifting Others--discovers a murdered man, Vicki finds trouble instead. The detectives want to pin the death on her, despite the evidence that nothing human could have killed the victim. As Vicki and her friends search for answers, ancient forces are roused by the disturbance in their domain. They have rules that must not be broken--and all the destructive powers of nature at their command.

I waited to read this one because i loved the main series so much that i was afraid to be disappointed but that fear was stupid....The author manage to get us back in the universe with sometimes a link to the main group but ,while we are in a completely new village we know some of the characters like Ilya and Natasha if we read the main series. If we are starting the universe with this book perhaps it could be a little confusing at first but soon we are so engrossed into the story that nothing else matter.I loved Vicki , she is respectful of the others even before meeting some and while she has strong panic attacks due to her past she still try to protect others and it was admirable. I totally love Julian the bookstore owner....he also had a very difficult past as an Inuit but still stay a protector he does not look for revenge and he can be so tender with Vicki.Grimshaw is an excellent police officer but he is independant and that does not work in his favor....except when he suddenly posted at Sproing ....meeting back with Julian who he worked with at the academy gives him his first ally but soon his need to protect show him how to work to others because he also wants to protect them even if he does not realise it at first. He is really open minded and a good human alpha.Both Vicki and grimshaw ( even if he had some experience it was not that intensive) are quite new to the wild country, they are learning the rules and what is expected of them ..when a group comes to try to change the rules set by the Elders and put Vicki in danger it's the whole city that could be paying the price so Grimshaw is determined to pretect the village now under his responsability and Vicki who slowly built an important place in the community as a links to the others.Full of tension, suspense sometimes gruesome scenes ( others know how to make a mess) this is an excellent urban fantasy story that could be read as stand alone ( but you just want more believe me)I would love to read more about them so knowing book 3 will be about Sproing again makes me quite impatient.