I was supposed to post this last week but i got really sick ( still not healed) and between the fever and headache reading or screen were not my friends. Really sorry ( will do better in 2019)
I will try to get back on track soon but to start i'm sharing with you my opinion on a new release in the Linear tactical series by Janie Crouch : Shamrock 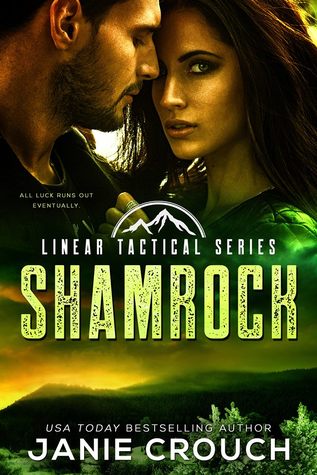 Every mission has a price.
He never meant for her to pay it.

Aiden has never left anyone behind. Not a comrade and certainly not an innocent. But when an undercover mission goes wrong, he's forced to abandon a woman trapped in a human trafficking ring.

Violet learned brutally that no one is promised a happy ending. She knows Aiden blames himself for his part, but she refuses to let her abduction define the rest of her life.

She won’t be a victim again. And she’s going after what she wants: Aiden.

Watching Violet transform herself into a fierce warrior is the sexiest thing Aiden has ever seen. The honorable plan would be to stay away from her—let her heal and grow without the shadow of his mistakes clouding her progress—even though every instinct tells him to claim her for his own.


But when they discover the danger they thought they’d left behind is closer than ever, they’ll have to confront their fears and fight side-by-side in order to survive.

My opinion:
Aiden is deep undercover when he sees something that makes him react....and willing to blow his cover however fate decide otherwise.....Still he can't forget the redhead who simply wasn't in her place and looked like a frightened deer.  I thinks that's quite telling about his character, he knows he is working for greater ends but still he is willing to sacrifices everything

Violet has no idea how bad the world really is before her kidnapping and even then she only get a glimpse as she is kind of protected (her captor are not supposed to harm her and a firm no sex rule is applied) but " kind" is important as she is far from sheltered as well.  I really admired her for surviving that, i don't think my mind would have been as strong.  When released she sure has flashback but she isn't trying to stay at home protected no she wants to become independent and realise her real dream  like opening her bakery.

Really those two were right for each other and i loved to see how Violet's brother Gabriel ( Gabe) was overprotective. their interaction were funny.

What i appreciated even more was the link with the author's other series omega sector that i enjoy as well. We only hear about those characters we don't meet them but that allusion was enough to make me smile and hope for more.

Really it's an excellent instalment even if it's not my favourite couple. I recommend without hesitation.