After a short break with a weather normal for the season we are back with a heat wave and no matter how i want it that affects my reading mood.
So today i'm sharing with you my opinion of Guardians of Stone, i'm really enjoying the other series by Anita Clenney so i was enthousiast to try this one, especially with teh kind of power the heroine has, even better Anita reader's group were discussing it in June so i was eager to join them. Unfortunately despite ordering the book with a more than reasonnable advance it arrived too late ç_ç i still could join the discussion  part of it) but i was disappointed to have gotten it too late so now i know i should only hope to join aread along if and only if i already own teh book taht will avoid such disappointment.

Now let's see what the book is about and my opinion of it! 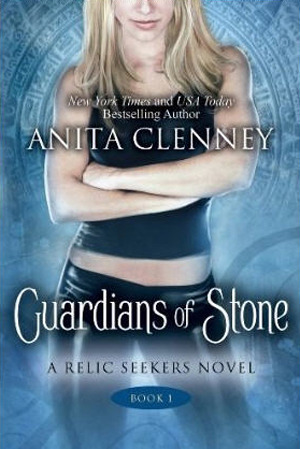 Kendall Morgan is a human bloodhound. Spending her childhood hunting relics with her ambitious archeologist father, she knew the two of them shared a sixth sense for the history and location of objects—sometimes even people. What she didn’t know was that their paranormal gift could ultimately be their undoing.

After the tragic plane crash that killed her father as well as her childhood best friend, Kendall dedicated her life to finding and protecting relics. When mysterious, sexy billionaire Nathan Larraby hires her for his latest expedition—the search for four powerful relics —she’s thrown into a world of high-octane danger. He sends brooding mercenary Jake Stone to watch Kendall’s back, but he may have created danger of a different kind.


As the team chases down clues, a man called the Reaper makes a play for the artifacts and will stop at nothing to put them to his own sinister use. What’s worse is that Nathan hasn’t told the whole story, and the dark secrets he’s keeping could cost them the mission…and their lives.


My opinion:
I had to wait to finally read this one but it was worth it. I like the psychometry ability even if i’m really glad not to have that gift so i was interested in the story but Kendall power is larger than that for example she doesn’t always need to touch an object to know something which makes it even more dangerous and intriguing.

I really liked how Anita gave us bits of information along the story to makes us understand the characters better and at the same be even more intrigued but all these mysteries surrounding them, some elements could be too much but she really manages to make it believable so we can’t keep turning the pages.

Kendall is a young woman, having lost those dear to her she became quite independent and can speak her mind. She is working for the mysterious Nathan, a very wealthy young man, finding lost relics... their relationship is one of a kind. Nathan isn’t her lover but he is deeply protective of her and most importantly he is trusting her, also strangely her power doesn’t work on him.
Suddenly, Nathan is sending her on a new quest but this time she must have a teammate, Jake,  another person employed by Nathan but someone she doesn’t know. For an independent woman, the fact to have bodyguard/ captor on her heels isn’t that easy.

Jake is also mysterious, we know he is working for Nathan and perhaps not entirely on its free will. They bickers a lot but Nathan seems to be protective of him too even if he doesn’t show it in a good way. Charged with the task to find a specific relic while keeping Kendall safe isn’t to his liking at all. At first he is even doubtful of her abilities and it’s on that occasion that we can see that Jake is also looking for Nathan . He is a fighter and probably an ex soldier however while we have learned a bit of what happened the large majority is still a secret as even him is looking for some answers. As the mission goes so the goes up his attraction for Kendall and we get to discover a possessive and jaleous young man.

The investigation for the relics is really well buit with secrets and magic and more mysteries along the way. The story is fast paced with a lot of action and i loved how the  exchanges between Kendall and Jake were heating up, they do have more in common than it seems.

Really the story is compelling and we are intrigued enough as not to want to wait too long for the next installment ( thankfullfy the third 3 books are already out) as we want answer to our questions...... for example i’m wondering is all the characters are who they believe they are but if i don’t want to spoil anything for you  i can’t tell you more.

A fun and addictive start for promising series.

Do you participate often in read-along?