Looks like Septembre will offer us a few sunny days at least and i quite crave days without rain at the moment.. but back to the reading planning.

This month i will try to finish what i received for review while still taking time for my crafting activities but first i want to share with you my discoveries in the paranormal genre about shifters but to change a little i will tell you about feline shifters: lions in particular. This will be a topic for the next week.( Don't worry i don't plan to read only about them either ;) )

So Let's start with a book "The Mane Event" which includes  not one but two stories for your reading pleasure. 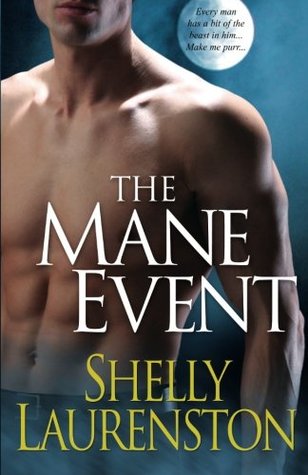 How come all the good-looking ones are insane?
That's what runs through NYPD cop Desiree "Dez" MacDermot's mind the minute she hooks up again with her childhood buddy, Mace Llewellyn. It isn't just the way he stares at her with those too-sexy gold eyes―as if he could devour her on the spot. Or the six-four, built-like-a-Navy Seal bod-o-death. It isn't even that he sniffs her neck and purrs, making her entire body tingle. It's more about that disconcerting, shifting-from-man-to-lion thing that unhinges her...and makes her want more.

Mace likes making Dez crazy. In fact, he likes her any way he can get her―in bed, on the desk, here, now, again. Together, they'd always been trouble, but Dez has no idea just how good trouble can feel...

Brendon Shaw, hotel owner and lion shifter, has seen better days. He's been beaten, had a gun to the back of his head, and had to be rescued by a Pack of shape-shifting wolves. He didn't think he'd survive the night, much less find the woman of his dreams. And he never thought the woman of his dreams would have a accent and wear cowboy boots. Once he sets his sights on her, the predator in him is ready to pounce and never let go.


Ronnie Lee Reed is ready to change her life, and is the place where any girl―even one who runs with a Pack―can redefine herself. First order of business: find a mate, settle down, and stop using men for sex. Even big, gorgeous, lion-shifting, oh-my-what-big-um-paws-you-have men. Then again...


My opinion:
A Christmas Pride was an enjoyable story despite the really explicit and numerous steamy sex scenes. I don’t mind a little but I felt as it was too much for the length of the story.  Also I found strange that  it’s the fact that he is a shifter that makes Dez accept Mace… I didn’t want her to be racist or anything but she doesn’t have to adjust at all and in matter of minutes they are in bed together? Man or shifter I don’t care but it was too quick, not realistic.

The investigation was not really part of the story either yes there is a murder a yes we learn who but it’s all secondary the “romance” is first and foremost.
The thing that made this one interesting for me was that it focused mostly on feline shifters, lions especially, and it’s a first for me. I’ve already encountered different kind of feline shifters as secondary characters ( hey even Curran is a lion and main character) but it’s the first time I’m reading about a group.  Let say that they are far, far from my favourites ^^;;  but Mace being more wolf than lion in his behaviour helped to make him good even he is  too oppressive for my taste

The secondary characters were really funny as well like smitty’s pack and I would love to see more of them so if you want a story with lot of steamy explicit scene, shifters and some humour you can try this one

Shaw’s Tail is the second story in this book and it takes place directly after the events of the previous story, or to be more exact it starts during the events at the end of “a Christmas Pride” as it focus on Shaw point of view of said events and their consequences.

Brendon Shaw did not really catch my interest before but I’m glad this one is about him because he is the kind of alpha I love. Yes he is a lion but he never really gave power to the females quite the opposite because he wants to take care of his cubs ( which is rare)… he didn’t grow up in a pride so his childhood was quite different from other breeding male and for him the family come first as the loyalty. I can’t resist one like that. However honestly… right at this moment the one I want to learn more about is his younger brother Mitch he sounds perfect as well ( meaning not the general lion submissive and being traded off)

Ronnie is a surprising character… she made me smile a few times but I really can’t connect with her. I really can’t recognise myself in her at all and thus it’s not one that I like but  she is funny sometimes, determined and protective which are quality I love. She is a good match for Brendon I guess.

It was interesting to see Mace and Dez again of course even if it’s only for a few appearances we could see how their relationship evolved during the few days after Christmas and it was funny and touching.
Now the style of the story doesn’t change at all and the steamy scenes are even more numerous, some I would say are erotica without a doubt and once again it made love the story less as I didn’t feel it was needed that much. However in this second story we have more humour as well and a lion dancing mambo is impossible to resist^^;;

If you want some feline shifters this is a series you can pick if you love steamy, if you prefer sweet romance better to pass this one