Today hasn't started as a good day,... to be honest the week didn't start well, so i'm quite a mess right now and i can only hope some positive news will come to change that even if i doubt it.
Anyway,  i wasn't in any state to read now but i had done my homework this weekend so i'm happy to be able to share something with you today.

As you know i love the "Ward of the Vampire" series by Kallysten quite a lot but she has written a lot more than that so when given the opportunity to try another of her series i was highly curious and excited...a new universe, new romance and still some vampires really how could i have refused. As a result i'm happy to share with you my opinion on Bodyguards the first book in her QuickSilver Codex. 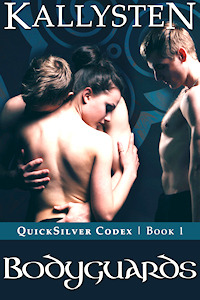 On the verge of her twentieth birthday, Vivien’s worries are those of a typical young woman: doing well in college, gaining more independence, and maybe managing to show Brad, her classmate and sometimes jogging partner, that she wouldn’t mind taking their burgeoning relationship to a different level.

Everything changes in the blink of an eye. Vivien stumbles into a knife fight, watches a man die in front of her, and soon listens, stunned, as Brad and his brother Aedan tell her a story of magic, vampires and a murderous ruler intent on killing a princess in hiding – a tale in which she is the princess and heir to a realm she didn’t know existed.


Vivien’s first instinct is to refuse to believe this incredible tale, even if it comes from a man she is attracted to. But when her self-proclaimed bodyguards use magic to take her to a different world, the edges of reality start blurring and Vivien has to figure out who she truly is


My opinion:
While I wanted to read this book I’m still agreeably surprised to see how much I loved it and how I want more something I should have thought since it’s written by Kallysten and that I’m so easily swept into her story thanks to her clear captivating writing style.

With the QuickSilver codex we are immersed in a sort of parallel universe where magic users (called “channelers”) live side by side with vampires and elves will be present too later… As her habit, Kallysten built a complex but enchanting universe that we discover along the heroine, in this case Vivien.
Vivien is a princess from that world called “ Foh’Ran” however since little she was raised in our world and forgot all about her origin….when her twentieth birthday approaches people are sent to kill her and the boy she had a crush on reveals himself to be is bodyguard sent with her to protect her.

Brad aka Bradan grew on earth to protect her like he swore to do…..as a child him and his twin Aedan took a oath to protect her by all costs…and since then both did it. Bradan living on earth started to have feeling for Vivien while Aedan left on Foh’Ran was alone… worse on Foh’ran time isn’t the same than on earth so wghat was days for Bradan was weeks or months for Aedan….while we learn about their past I could only feel draw to Aedan because he is the one who sacrified the most in my opinion and sadly he is suffering from it while Vivien reject his sacrifice and his helps.  She is quite accustomed to Brad but Aedan is unknown for her and thus she is acting rudely with him and I wanted to slap her from time to time..
Oh it’s not I don’t like Vivien, I mean with everything happening to her she is adjusting quite well but sadly she was a little focusing to much on herself in my opinion… she is judging with searching for answers first and how she acting with Aedan wasn’t fair…. He protected her for years, he did things for her he never thought he would, he sacrificed his channelling ( kind of magic even if he would hate that word) for her and at best she is ignoring him….She is acting like a child when they wanted her to be a queen but she has first a lot to learn.

Kallysten is also a master at slipping tips or doubts from time to time and thus we are after this book wondering what the supposed king is accusing the late Queen of…now his action don’t make me doubt he is a bad man….he is cruel, arrogant and a killer for sure but his alleged accusations do me make wonder what he has under his sleeve and how Kallysten will certainly surprise us.

There were a lot of moments filled of emotion: when the brothers reconnect with each other, Annabel return and what to say about the first attempt at channelling from Vivien. Brad is really in love with her but put his duty first a long time while Aedan is ready to be left behind even if it means his death…the ending is a cliffhanger and I hate those with passion but to be honest even without it if I had the next book ready I would just read it without waiting more.

If you want a good paranormal romance with parallel universe, vampires and magic this one is for you

Disclaimer: Source: a copy in exchange for an honest review, no other compensation was received.All opinions are my own .