I decided to start the year slowly, oki the fact i've caught the flu helped but i want to avoid the stress, so i decided to start by reading some books i really want to because i loved the precedent so much i couldn't wait longer.... i picked the next in line for me in the Jane Yellowrockrock series by faith Hunter and while it was a good choice i could have done better. The best part is that this book works for all challenges i've entered so far.

Anyway let start with the first review of 2014, Mercy Blade by faith Hunter 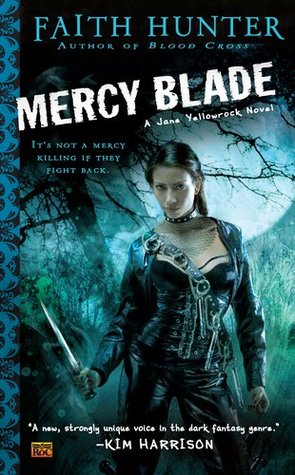 Jane Yellowrock is a shape-shifting skinwalker--and a rogue-vampire hunter for hire. But lately she's found herself taking blood money from the very vamps she used to hunt.


Things are heating up in the Big Easy. Weres have announced their existence to the world, and revived the bitter tensions that run between them and their old enemies -- vampires. As a trusted employee of Leo Pellissier, Blood Master of the City, Jane finds herself caught in the crossfire.

When Jane is attacked by a pack of marauding werewolves, she is thankful for the help of a mysterious stranger named Girrard. He explains that he used to be Leo's 'Mercy Blade,' a sacred position charged with killing young vampires who have gone insane. What Jane doesn't know is why this powerful assassin left . And more troubling, why he's now returned. It's definitely not to make Jane's life easier.

My opinion:
Faith Hunter is excellent as always but I must admit that so far this book is the one I liked the less in the series. It’s a good one don’t misunderstand me however I’m not fond of universes were werewolves are depicted as crazy beasts and sadly this story focus on them while their description is of savage beast without moral etc… now it’s not that radical they have rules but they don’t follow them and while we get their history it really doesn’t sound fair to them.

Now the great part is that the author makes difference between the different kind of shifters not all of them are so crazy and I guess I can hope for a remedy for the werewolves then^^ after all we all can dream. So I did get interested in the story but this one was a lot more complicated than the first 2 books. Hard to keep up with all the investigation but it was well worth it. I appreciated that Jane was one man- woman and didn’t want to sleep around even if I regretted the choice she made…. Rick isn’t stable and she need stability but beast won on the attractive part I guess^^^. Leo seemed really instable and I hate him more after each book ^^, the way he acts with Jane, how he push aside his most loyal followers… really he can’t be trusted and so far I can’t even respect him but it’s part of the vampire mentality I guess. Bruiser just can’t leave Leo and is too devoted to him to be good for Jane but I think he is the more interested anyway

Molly and her so sweet little girl make some phone interventions and as always I love those they are so funny and protective. I couldn’t stand Evangelina since the beginning and I found strange to see Jane trusting her so quickly and easily.

I really loved the idea of more feline shifters and then the specific creatures ( anzu or grindy) are really interesting and I hope to learn and see more of them even if my opinion on Gee is still hesitant. I need more to decide if I like him or not but for sure I didn’t approve of his actions in this books even if I understand his motivation.

The ending was a little too predictable for me and quite heartbreaking but also a form of cliffhanger so I’m glad I have the next book ready. If you love this series you will love this book even if it’s darker than the precedents and some descriptions are really not for sensitive soul, you will just want more.