In my country, the season of Carnivals has started ( and will last several months^^;), the participants were lucky today because even it's was really freezing  the sun was shining ( big difference from a few days ago  with  several centimeters of snow). My city won't have it's carnival before one month , as often it will coincide or nearly with my birthday.

Why did i tell you about carnival? Simply because this series always amazes me with his large variety of paranormal creatures in a way quite similar with the parade of our Carnivals so you can always find  one that fit your tastes^^( in my case this month it was angels and fallen angels).

So while i hope you are all safe and warm, here is my opinion on Under attack by Hannah Jayne 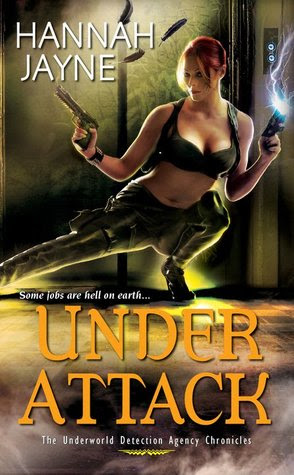 Sophie Lawson is a human immune to magic, which comes in handy for helping paranormal beings transition into everyday life. But fallen angel Alex Grace and his search for the Vessel of Souls is one curse she never saw coming. Suddenly an unexplainable string of killings and destruction has even 's demons fearing for their immortal lives. And Sophie isn't about to trust Alex's all-too-vulnerable charm or his secret agenda. Now their hunt is revealing dangerous secrets about Sophie's past, and malevolent power hellishly close to turning one irreverent human into the ultimate supernatural weapon.

“Under Attack” takes back one year after the events of “Under Wraps”, Sophie hasn’t recovered perfectly from her ordeal, Alex, the fallen angel has left her 6 months ago, and the UDA – underworld detection agency- is still trying to find a replacement for Sophie’s boss and until this day it doesn’t look good leaving Sophie trying to save things, fix mistakes so the agency keeps an appearances of normalcy – underworld normalcy that’s it.

One thing that I love with this series, it’s the variety of paranormal creatures, dragon, goblins, centaurs, angel, fallen angel, werewolves, vampires..; there is a fantastic mix so you have to find one that stick your fancy. Of course not of them are put under the lights but they exists and we can always hope to learn more about them. This book focuses on Sophie and on the angels and fallen angels since Alex return to ask for her help in his mission to recover and protect the vessels of souls. We learned a bit about this in book one so I really recommend to read this series in order even if this book would work well as a stand alone too because Hannah Jayne give us a little background of what happened previously so the reader isn’t lost.

Sophie has a lot of things on her plate in this books, family troubles, job’s trouble, and as always she is trying to survive several assassination attempts. I was surprised to see her best friend, the vampire called Nina, not to take her seriously most of the time. She seemed to be not herself and that’s intrigue me. Sophie is still determined and in fact this book show us how determined she can be for the things in which she believes. To see her grand mother as a spectre with a life of her own was quite funny too and it eased the tension.  Thanks to the return of Alex and his ex and enemy Ophelia, we are learning more about the powers and history of the fallen angels and that’s something I needed to discover like Sophie.  Now the mystery isn’t resolved, we get some info on Sophie’s father but that’s still a little unsure and Alex must make some choice. So the rest of the series could be very , very interesting.

This book is better that the first one but I still thing the author could do better. I wasn’t completely drawn in the story and I didn’t managed to read it in once, I took break, came back etc. the story was really interesting even if some parts were predictable since the beginning of the book Hannah managed to add some twists to keep the interest but I want something more without being able to point what out.

If you want something a little different in your Urban fantasy reads, this is a series you could give it a try.