here comes my review on the romantic paranormal suspense ebook called " Bonded". It's the prequel of the mating ( book1 of the Lycans'world) by Nicky Charles. Try it, it's free and really good. 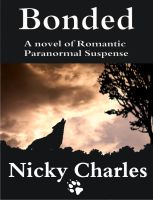 Author: Nicky Charles
Genre: Romantic Paranormal suspense
Published 2012
Pages: 260
Langage:mild
Sex: mild
Violence: strong
Public: 18+
Source: free download on Smashwords.com
Summary/ description from Smashwords:
’s a tough Enforcer for Lycan Link who finds himself drawn to Brandi but duty rules his life. Brandi, just on the edge of starting her career as a Disaster Control officer, falls for Reno at first sight, but are they really meant to be? Is it love or lust and does it really even matter? Enforcers and DCs don't get along...unless fate forces them to. Bonded precedes The Mating.

Story:
In a world were the Lycans live around humans they have their own history and problem similar to humans ones. In the past, when their laws were written, the purity was important to avoid extinction because of that the ones that loved humans and had baby with them were savagely killed as were the children.  When the situation became better, it was decided to  interpret the law differently. Mixed marriage were authorised and  children, called halves, born from them were considered people with rights as any others. However, history has shown that often some people don’t want these kinds of progress and some created groups called the Purists to try to make a comeback to the old ways. For them, half  and mixed blooded are just slaves with no right at all… just good to served and be killed. To protect these innocent Lycan Links was created  with a  part of the group called Enforcers sorts of special corps whose missions is to check that the rights are respected and interfere when it’s needed to save the one in needs. There are laws to protect the lycan with one parent human.
It was thought that the Purist had disappeared but now the Enforcers have proofs that it’s not the case and even worse they are spreading, taking over some clans and such. Reno is the best of the enforcer, knowing the danger he has planned to find new recruits for his squad and for that he goes teaching in the University, a place were lycans males and females go to learn  self-defence and to be controlled. It’s a place were only the strong willed go such as the future leader or the ones with a tendency to become rogue, lycan lost to their beast without humanity left.
During one lesson, he meets Brandi, a young strong willed woman and the make a fight demonstration that nearly falls out of hand.  Brandi loved him since the first time she saw him, it’s a last year and she has concentrated only on her works so this love very present isn’t acted upon…until the fight and that leads to the night after the final exam. Also intrigued finish to accept the decision of his wolf and make love to her…against his principles he even leaves her his phone number and asks that she calls him. When they meet, Brandi is overjoyed she has passed as top of her class and even got her dream Job: DC Damage control officer, the one that create stories and lies to keep the existence of Lycan secret. However what she didn’t know was that DC and Enforcers don’t get along at all and when shows how much he despites them she leaves angry. When won’t see each other before several months or years and each time they fight, argue and separate very angry. But fate seems determined to make them meet and work together….
Style:
Nicky Charles has created a world of his own for his serie.  The characters are well developed and to help the reader to understand the founding of this universe he uses the lessons the characters study and revise to remind them to us.
The rhythm is constant not too quick not to slow and he show the evolution on the long term with a story taking place during several years.

My opinion:
It’s the prequel to the first book of the trilogy but the four one published so we discover a world well constructed and I can’t wait to read the first book published to see if there are some evolutions or if it was so good since the beginning.
The story is full of actions and I was captivated by it, the romance is there, the plot is really interesting and the investigations so captivating…I didn’t know what to expect until the end and even the end… oh my….
I couldn’t stop myself to see the similitude with our real history and it was great and in the same time a bit worrying to see that even with all our efforts changes aren’t definitive and take times. I also appreciate the action of the author that gives us his stories free so we can make a donation of our choice.

You can download  this story in different formats  here on Smashwords