It's with an great pleasure that i'm reviewing Absolution today. Susannah Sandlin is an important author for me and i really appreciate her kindness and generosity so i'm feeling honored to review the second book of the Penton Legacy Series. If you haven't read Redemption yet jump on it, it's really excellent, you can find my review here or even in french here.

Absolution is released on the 9th october so don't wait to pre order/buy it you won't have any regrets. ( It's even on promotion on amazon so take advantage of it) Also during october there is a blog tour celebrating the release of Absolution where you can win an kindle so check her blog please ( it's international!!!!) 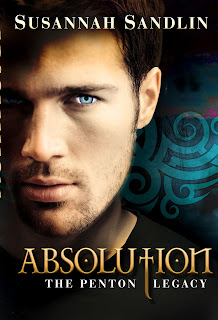 With the vampire world on the brink of civil war over the scarcity of untainted human blood, battle lines are being drawn between the once peaceful vampire and human enclave of , and the powerful Vampire Tribunal. Mirren Kincaid once served the tribunal as their most creative and ruthless executioner—a time when he was known as the Slayer. But when assigned a killing he found questionable, Mirren abandoned the tribunal’s political machinations and disappeared—only to resurface two centuries later as the protector and second-in-command of Penton. Now the tribunal wants him back on their side.

To break their rogue agent, they capture Glory Cummings, the descendant of a shaman, and send her to restore Mirren’s bloodthirsty nature. But instead of a monster, Glory sees a man burdened by the weight of his past. Could her magic touch—meant by the tribunal to bring out a violent killer—actually help Mirren break his bonds and discover the love he doesn’t believe he deserves?

It’s always great when the second book of a series is of the same quality than the first one and Susannah Sandlin doesn’t disappoint at all!

Now to enjoy this book to his full extend, it’s really better to read Redemption first because they are a lot of consequences from facts done in this first book as well as a lot of details explained. I guess Absolution can be read alone, yes, since the author took the time to explain again some important facts but you would be missing too many things at my opinion. Now if you have read Redemption first, you are just going to be immersed in the story where you left it.

This book is centred on Mirren, second in command to Aidan and experimented warrior. This strong vampire isn’t happy, his life in Penton is giving him some satisfaction but mostly he is still caught in his past and what he has done. Once he was the executioner for the Vampire Tribunal and while at his post he didn’t think about what he was doing since he what similar to his job as an human warrior but slowly he started to wonder until a case that put everything under a new lights. He then decided to disappear and faked his own death but until Aidan he didn’t believe in anything again. He keeps torturing himself, thinking he is only good at killing even if in the same time he is trying to change his way of living and reputation. While caught in his enemy hands thought he fights to stay who he wants to be and instead of killing the woman sent to him he drinks from her without abuse and saves her at the first occasion.

Glory has always lived the life of an outcast; even her family was ashamed of her because of her difference. Captured and tortured by vampires, she refuses to gives them what they want. Even drugged, she keeps resisting so much that he captor gives up and prefers to use her as a bait to make Mirren become a killer, lover of blood again. However, when confronted to her supposed killer, Glory sees first a man, another prisoner who needs her help. Saved and under his protection, she learns to accept herself while discovering what Mirren kept secret about him and instead of seeing his past like an hindrance she saw it as what made him become the man he is, the loyal protector. She decides quickly to put her talents to his service.
It was wonderful to learn so much about Mirren, to see why he was afraid of the responsibilities and how troubled he is, we had a glimpse of those reasons in Redemption but it was vague. In absolution, we really can understand him and discover his humour.  His relationship with Glory is cute, the way he see her as fragile and him so strong while she thinks and sees something quite different. They both have to adjust and the author did use the perfect psychology for them, so well that we can understand and feel compassion for what they lived and what they are facing now.

I also loved to see Will again, transformed really young he was still a bit immature in the first book, playing videogame, making jokes but he could also act like the lieutenant he is. In this book we see his evolution while he still act like a teenager when bickering with Randa about anything he also take responsibilities. He takes some risks for what he believes in and he admits his weaknesses, he doesn’t try to hide them. He isn’t a leader but he is a really good lieutenant and his abilities shouldn’t be looked down. If Mirren is a great battle tactician, he still need Will as an excellent analyst.   I wouldn’t mind to discover how he joined Aidan in more details.
Aidan and Krys also have they role in this book but a minor one and I was surprised to see Krys so vulnerable because some weeks have passed between the two books and Aidan wasn’t as protective as I thought he would be (a bit too trusting and not paranoiac enough^^)

After the characters, what about the plot? Susannah Sandlin really knew where she wanted to go because the plot is perfectly in the line of the first part of the trilogy, not a glitch. Nothing is missed from what we learned before, no contradictions or inconsistencies. We still have the main plot of the trilogy: the tension between Matthias and Aidan and all the inhabitants of Penton because of his thirst for power, his jealousy. And we have the smaller plots, which have consequences later in the story with the political power struggles with the unexpected allies and the treacheries. This book is just a bit darker yes but nothing too horrible ( and I’m really sensitive^^)The end isn’t a cliffhanger but I can’t wait to read the last part to see how the story will be developed to its conclusion.

I really loved this book with her sweet romance and a Mirren a bit hesitant and far from perfect and a Glory with humour and her dreams, her fighting spirit. Sweet Hannah is so cute and showing her innocence when she is crying or laughing. The characters are really well constructed, their psychology with real basis making them so easy to believe in.

Really, it’s a great book and it was really difficult to put it down. I would recommend it to the lover of paranormal romance and to those who like to see vampires strong, fierce but not overly dominant.

You can find more informations on the series and Susannah on her Blog
Source: a copy in exchange for a honest review, no other compensation was received. 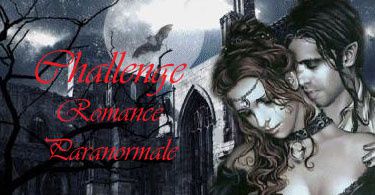