Have you recovered from Christmas? Ready for New Year Eve? To be honest, i'm not and i should definitively be resting if i hope to be able to stay up all evening but that's the last line to finish 2013 challenge and i hate failing so much that i'm doing my best. I still need to read 2 sport romance but first i wanted to close some gaps in the series i've read this year.


When I was reading the Dorina Basarab series, book 2 in particular I suddenly got the impression I was missing a lot on the story and then I was reminded that there was a novella set between book 1 and book 2 “ Buying Trouble” that centered on Claire. I had to read it and I was happily surprised to see that it was available in digital but also in a print anthology (that I owned).

For my own peace of mind I had to read this before New Year as to start 2014 on the good base without any blank in my series.

Have you reached all your reading goals already? Working to tie some gaps? 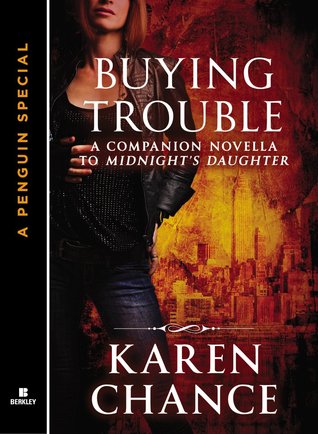 In Midnight's Daughter, New York Times bestselling author Karen Chance took us to a new corner of Cassie Palmers world and introduced us to the lives of the mysterious vampires who rule the night. Now, read the eSpecial, Buying Trouble, the companion novella to ’s Daughter, and learn why vampires aren't the only creatures to fear.


Claire just wants to keep out of trouble. But that isn't always easy when you’re a mage with the extremely unusual ability to block all magic around you. And when Claire’s sleazy boss decides Claire herself is the most valuable rarity to sell at a magical auction, trouble finds her. Now, her only hope for survival is to trust a mysterious and handsome stranger, a Fey Lord named Heidar. As their pursuers close in, there's one thing for sure, savior or threat, Heidar can show Claire things she never imagined in this world, and in herself. . .


My opinion:
Definitively a novella that you have to read (preference: in order) if you want to have a better understanding of Dorina Basarab’s universe.  The fact it exist both in digital and print is really a bonus and I was really happy to discover Faerie and part of its politic  because the relation between the different “ clans” are explained but only a little since the story focus more on Claire and her real nature, identity.

To be honest I wasn’t remembering from book 1 how Claire had a difficult childhood and thus now I understand better how she came to stand by Dorina and why she never give up… Dorina was after her uncle the only one to really care for Claire as a person not for her magic which is the opposite of what her family did, selling her to be a slave after making life difficult for all the childhood. Here we get a glimpse of said childhood by Claire’s memories and really it hasn’t been easy. It was also really interesting to learn more about her magical talent but what I enjoyed even more was discovering her second-nature and those who come with it^^ like the tending Harpy surprisingly kind ( at least with Claire).  Yes it wasn’t a total surprise since I’ve read Dorina Basarab book 2 but learning how it happened the first time was simply too funny .

I also enjoyed how Claire met Heidar and how their relationship built in crisis time however I guess I was surprised at how little careful he was…. They are in danger, he knows thing Claire ignore totally and despite all that he set things in motion without thinking more about the consequences…. As much as he was making me smile before and I liked him I just wanted to slap him then ( glad Tanet did a little to put some weight in his head).

Nevertheless I couldn’t love this story…. I liked it yes but I was expecting so much more from the hints in Dorina Basarab book 2 so I’m still feeling like I’m missing something and that’s what I hate in a series…. Yes we learn about elves, yes we discover Claire’s nature but nothing about the “pet” Dorina got ( supposedly when she was looking for Claire) we don’t get the big clash between Dorina and the villain elf who is determined to have her head no Dorina is only cited has having paid Claire’s cousin a visit….nothing else.
Also when the romance is in place, the end of the novella feel a little rushed it’s not bad no and if you read it in order you will probably not feel this missing element feeling but if you read it  after the rest of Dorina series it’s good yes but not as excellent as it could have been.

However, this could even work as a stand alone if you which because there are nearly no reference to the main series. So if you are a lover of Karen Chance books, I can only recommend that you read this one in it’s place in the series, if you just want a funny paranormal romance with elves and others kinds of characters  you can pick this one for a fun ride.