It's soon St Patrick's day - just the day after my birthday-so i decided to share with you a book i felt lucky to discover. As you know , this year i've entered a challenge to read sport romance because it's a subgenre i didn't know... i wanted to try and not to limit myself to more common sports either. So when weeks ago, a friend blogger i trust, introduce me to a new series for the release of it's second book i was delighted. A sport romance yes but a really well written one from the excerpt i saw. Even better Brenda and me we share common taste so when she loves a book  i will most likely love it ( and vice versa).. only downside... there wasn't a pdf version at our knowledge but the author kindly told me that if i was to win she was going to try to get a pdf format. Amy gregory was so kind and fun that i started to follow her immediately......

A few week later i was lucky to win not book 2 but book 1 AND 2 and as promised she asked for the pdf for me so i can tell you how delighted i was and still am. i love when the authors take their readers into account.

And it's with ggreat pleasure i offer you my opinion on book 1  "Carter's Treasure" today, don't worry you will get one for book 2 too but i wanted to separe both of them so you could enjoy those books, can be read out of order but reading the series in order will give you more pleasure. From the outside, Molly West had everything, beauty, brains, and a career she d retired from not once, but twice. Being in the limelight and in a sport that was male driven, she was often surrounded by men. She ignored first the boys, and as she got older, the men. Her cold shoulder and patented not a chance in hell look were usually enough to get her point across. Molly had no plans in changing what was a perfectly good system. That is until she walked into the pits. Carter Sterling had traveled the racing circuit since he was a boy. He d heard all the old standbys, She s out there somewhere, love comes along when you least expect it. Good things come to those that Yeah, he d heard them all. The last place he expected to meet the love of his life was on a pro track. All she did was smile, and he knew, looking into her sapphire blue eyes, Molly West was his. Forever. If it was only that easy. From the moment he laid eyes on her, he had a gripping feeling in him. An overwhelming need to protect her a girl he d just met. Carter had learned a long time ago that gut feelings are almost never wrong. Molly now held his heart in her hands, but it was going to take a lot more than just love to protect her from the past she thought she d buried a long time ago.


My opinion:
When I discovered Amy Gregory during the blog tour for her second book, she caught my interest with an excerpt only. As you know I’ve decided to try to discover the sport romance subgenre so it entered that category but it seemed really well thought too. So when I won book 1 and 2 I was jumping everywhere, really happy and I couldn’t wait to discover her universe of motor bike racing.…

Each book can be read as a stand alone but Brenda ( a blogger i admire and trust) told me that while I could easily read book 2 first it would be better to start with the first one “Carter’s treasure” and I really don’t regret it.

This book is a wonderful romance and offered me a glimpse, oki even more than that, of the motor bike racing universe which I was completely clueless about. The author really managed to make you feel comfortable with that sport even if you don’t have any prior knowledge because the character are racers and retired racers, the setting is different place where the races are held but we don’t get into the technicalities of said sport so really no need to be afraid. For me it was also really interesting because it’s not a sport I saw a lot in the books I could read (often it‘s football or baseball so great change)
Even better, there is apart of suspense, a little investigation and it’s something I appreciate so it was an added bonus in my eyes.

The characters are really believable, Molly has been traumatized and still suffer the consequences more than 10years after the trauma, that’s the reason she is really overprotected by her  adoptive parents and her ”brother”. She is riding a bike since she was toddler and racing just a little after… that’s all she know all her life and she love that sport. However, that kind of wandering life following the races and the training this sport requires had the effect to cut in her social life. She didn’t date, go out etc. Always surrounded by others racers, mostly male, but protected by her family she has kept her distances. Some could think strange that she accepts how Carter is touching her already the first night but  it didn’t bothered me…perhaps because of the kind of traumatism she had..; she wasn’t violated so the “touch part” isn’t the problem it’s more the trust and yes sometimes we offer our trust immediately without knowing why. She is also in her late twenties so not a child anymore and she is a little uncomfortable with those marks of affection at first, just she is not hurt. What is more affecting her is the violence and shouts and the authors described several scenes to better make us understand that.

Carter is determined but also really patient. He is sure she is “the one” for him as soon as he saw her but he doesn’t put too much pressure on her. Yes he is touchy and yes he flirts with her but when he discovers how innocent she is he let her set the speed. I really appreciate that and how he was protective but not suffocating her. He keeps his promises, doesn’t try to change her and he is persistent despite all Brody’s attempt to make him leave he stays like promised, even when he see her at her worst he stays by her side and for me that a great show of love.
I loved how Carter’s friends were supportive of them and helped when needed, I’m glad I will see more of them in book 2.

The romance is really well constructed and the rhythm is adapted to the character, their life and the situation they are in , Amy Gregory really drew me in her story and my hearth went to the characters so often that I couldn’t make a break in this book. I just wanted more. The plot with the stalker, the threats was really a perfect idea to make the things happens more quickly, to push her to make some decisions while showing her how much she could trust her family, friends and lovers. It was also one really well thought and I didn’t guess who was the culprit or why he was doing it before it was revealed.

The only downside is that sometimes the change of setting or time had me surprised and I went back  a few page to be sure I didn’t miss a passage, page or something. But it was her first book so I’m sure the author must have improved that (and still could) but despite those few and short moments where I felt lost I really enjoyed this story greatly and the ending was just perfect!

I really recommend this story if you want to discover a good sport romance with a lot of feeling, happy end and well written even if not perfect. 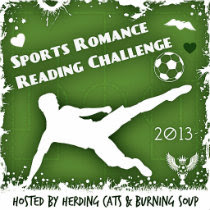 Now you could be lucky too because the author has a giveaway on her blog to win a copy of the second book Jesse's soul. You can enter here until the 18th so hurry and good luck ;)
Publié par miki à 09:40