Since i was absent last week ( hey it was my birthday and i didn't really had time for me so for the blog even less sadly) i decided not to wait and to introduce you to the second series i'm giving you my opinion on: The Big Bad Bite series by Jessie Lane. it's not a new series and i've been wanting to try it for quite a moment ( even got book 1 in my pile) but  forgot about it however a new release will be out soon so it's time to get back to track so here is my opinion on book 1. 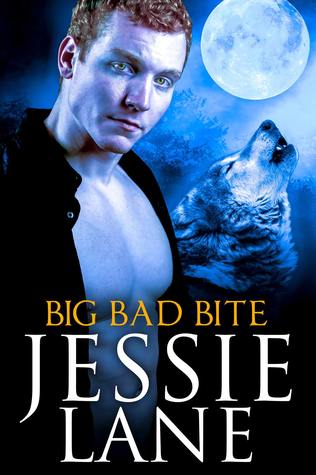 The first book in the best-selling Big Bad Bite Series!

What would it be like to live in a world where you were considered abnormal even to those who were above the norm?

Jenna O’Conner is not human, nor is she considered the norm for the supernatural Other community. It’s important she hide her true nature from both humans and Others.

Right after moving to a new city, Jenna runs into trouble in the form of a deadly, mouthwatering man named Adam McPhee. He’s an alpha werewolf determined to do two things: figure out exactly what Jenna is and have her all to himself.

As if that weren’t enough for Jenna to deal with, a group of extremist Shifters who consider humans to be cattle and who think that factions of Others should stay within their own species—never to intermingle—come to town. Jenna has to find a way to shut them down, but in the process of trying to do that, she discovers things about herself that even she had never thought were possible.
Who said the wolf was what you had to worry about?
Welcome to the real world—the Other world.

Interesting....while i didn't like the main female character and didn't really warm up to her i really enjoyed the universe and some secondary characters making me want to read more but let see that in more detail.

Adam is an alpha wolf, from what we can gather he did have difficulties while growing up because his wolf is really strong and present which isn't well accepted. However, despite all that he is a very loyal and caring leader and as we discover a quite patient mate to be, very tolerant and accepting . Really it wasn't hard to come to love him and support him even if i regret the fact we didn't get more insights on his childhood but hopefully we could still learn more in the rest of the serie.

Jenna is the opposite...she isn't bad per say but having spent her life sheltered she is ignorant of a lot of things regarding shifters and she  is definitively too self centered for my taste. I get that she wants to be independent, to prove herself etc but she is so selfish at time that i wanted to shake or strangle her. She may be powerful but she doesn't look for others than herself.  While at first she doesn't understand why Adam is reacting as he is and could be confused while she does learn the reason she acts like it's nothing, no matter the risk for others, risk she perfectly understand. No, trust issues aside that's what she wants when she wants....she must have gotten that from her mother but definitively can't like her at this point even  if she does act at the end.

Secondary characters...there you have so many that's it's not hard to find at least one you want to support  and learn more about him or her. , the demon is funny. he is a police officer and was surprisingly good to Jenna. he sure made me curious. That being said i think i want more of the tigers though.... that family is fascinating and funny despite being highly dangerous and still quite mysterious. There is Alec, not sure what his real job is but he fight in underground battle which help him to be well informed. Then it's Gage....we know little except that he is fiercely protective of his family ( even Alec while they bicker all the time) and that he must be in some kind of elite army/ security shifter agency....all top secret of course but with a lot of interesting toys or electronics to be successful in highly dangerous mission..... i so want to learn more about him. Then you have the sister lulu, we only hear about her so far, and  even better the Russian grandma.....oh that one will make you smile for sure

I also found quite funny that if some groups are trying to impose to shifters to stay with their own ( wolves with wolves, tiger with tigers etc, etc) not mixing between shifters of different origin or worse with other paranormal. Both pack masters we learn about did the opposite, once with a demon, then with a tiger... It's promising some sparks. There are still so much to learn about this world but at the same time nothing is missing preventing us to enjoy this story fully so it's really well done.

There is a small cliffhanger but nothing major  we do get the essential for this story to be happy and it just make us impatient to read book two ( with tigers!!!!!). There is a major main plot taking place along the whole series so that isn't solved yet of course but  each book has it's own story which feel complete so it was really no problem for me.

Disclaimer: All opinions are my own and i voluntary reviewed this book
Publié par miki à 03:15