Today i'm here to share my opinion on a new release by E.J. Stevens from who i've read the Ivy Granger series. It's a series with a character from the Ivy series, but that aside it's completely different. It's a dark urban fantasy set in victorian time which can sound promising if you love horror and dark stories. 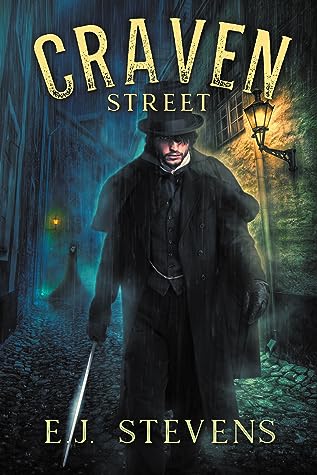 In this spellbinding novella, E.J. Stevens weaves a tale of murder, necromancy, and demonic possession that brings together characters from her Whitechapel Paranormal Society Victorian horror series and award-winning Ivy Granger Psychic Detective urban fantasy series on the fog-shrouded cobblestones of .

The discovery of bricked up skeletal remains at point to something more diabolical than an illegal anatomy school. The tool marks on the bones, arcane sigils of great power, indicate more than mere butchery, more than enlightened experimentation. The signs, omens, and portents support the crown's greatest fears. A great evil is being unleashed upon the gaslit streets of , a blood-drenched shadow reaching skeletal fingers beyond the slums of Whitechapel.

We must stamp out this demonic plague for the sake of our Queen, our Country, and our immortal souls. - Cora Drummond, Whitechapel Paranormal Society

Collecting human souls is a thankless job, nearly as tedious as acting as solicitor to the fae. But when the demon Forneus enters an opium den searching for men eager to trade their souls for the ill-smelling weed, he stumbles on a plot so devious, so heinous, he's jealous that he hadn't thought of it himself.

There's nothing like a maniacal plot to unleash Hell on earth to break the boredom of immortality. - Forneus, Grand Marquis of Hell

My opinion:
I loved the Ivy Granger series so i was curious about this series but it's sure really different. This book ( and series?) is really more horror than Ivy Granger's one, it's really dark  both in the events happening but also in the character's mentality.

The Whitechapel Paranormal Society is a group of women with special abilities who are part of the force but in secret focus on the supernatural elements. They have their male counterpart but those really looks down on them and even try to hinder their work...their misogynist point of view though understandable in a historical period still started to bother me after a time because they get the job done and even with all those men must have seen with paranormal they still can't respect them? even a minimum?  it's frustrating.

The intrigue is the start of something bigger and the mystery is really well written, really dark too. The different characters are interesting but we focus on Cora and Flan more than on the others so we see little of their powers but it's tempting so we want to discover more about them and how they choose that job , discovered their abilities etc.

That being said some point bothered me more. First at time , i i had the feeling to have missed something as the situation jump to another without really an explanation or link even if we go back to track just after  it's like something was missing. Then the relationship between Cora and Flan bothered me....somehow i think it would it would have been better if they were just friends or colleagues , the lover part even if not too developed sounded wrong . I don't know if it's because we get the feeling it's part historical and at that time while homosexuality existed it wasn't done in public or because it give the feeling no male characters could be good enough, open minded to these abilities....it just wasn't necessary for the story in my opinion.