We are enjoying a few days with sun and dry weather and it's simply so agreable after long rainy days that it's hard to stay inside to read but i'm trying.

Today i'm sharing with you an early review of Angel book 4 of the Linear Tactical series which i'm enjoying more and more after each book.
This my opinion on the less steamy version. 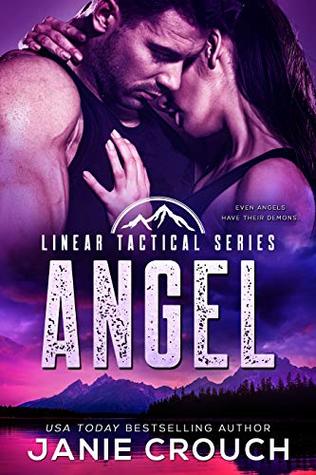 Even angels have their demons

Jordan Reiss is well aware that if she was on fire the entire town of would probably go inside and make a sandwich. She can’t blame them. Her father scammed half the town out of their retirement funds, and then she…

She did so much worse.

She doesn’t expect forgiveness. But she’s back in town with no other options and just wants to be left alone to live on the fierce land she’s missed so much during her six years in prison.

Former Navy SEAL Gabriel Collingwood's callsign may have been Angel, but he'll be anything but to protect his sister. Especially from a pretty ex-con who has somehow weaseled her way into a job at his sister’s new bakery.

He doesn't trust , even with her big gray eyes and quiet smile.

But when someone decides its time for to leave —preferably in a body bag—Gabe will have to put his distrust aside. needs her own guardian angel. And he happens to be one.

******
ANGEL is a stand-alone steamy romantic suspense, set in the LINEAR TACTICAL series. Meet the former military men of Linear Tactical, and the women who bring them to their knees: The strongest fall the hardest.

My opinion:
A real rollecaster of feelings, once started you won't be able to stop until the last page.  The particularity of this book, if you read the precedent instalment in the series is that it takes place at the same time as book 3 for a big part of the series so you see events you already knew about but from another point of view and i really loved that. Thanks to that it can also be read as a stand alone.

really suffered and it was far from fair, she made mistakes and paid really an hard price for that but worse when outside most people are still shunning her or worse making her life even more difficult. She is a good, loyal girl so it wasn't easy to see her confronted to so many trouble at the same time.

Gabriel....he is a protective but stupid alpha, oh he sure can be smart in a lot of domain but in human female area he is deeply lacking....he hurts Jordan so man time  i'm not sure i could have forgiven him but Jordan does see his weakness under his all bad muscles appearance. The grumpy bear is in fact a teddy bear with a sweet heart. I did appreciate how Gabriel could recognize his errors and learn from them.

Since it's partly the same event than in book 3 that part of the intrigue was known to me since i've read but the the intrigue with was really well written and i couldn't wait to read more.

We do get to see the whole linear team and  i just want Dorian story even more now^^;; i need to discover the mysterious woman hunting him but still helping the team in her own way.

This is a fabulous story that i can only recommend with a lot of enthusiasm as a stand alone or read in order.