For my reading of this beginning of the year i decided to alternate between new authors to me that i had on my TBR pile waiting for me and some series i really loved but somewhat fell behind.

This time i go back to a series that i tend to enjoy more and more after each installment : The October Daye seeries... i'm missing some books in it and it's the reason i stopped reading it for a time and slowly i got even more behind. Now i'm trying to get back on track ( to be at least up to date at the end of the year^^;;) 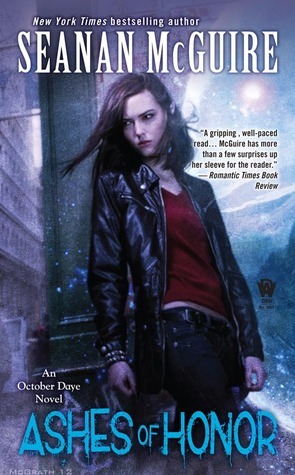 It's been almost a year since October "Toby" Daye averted a war, gave up a county, and suffered personal losses that have left her wishing for a good day's sleep. She's tried to focus on her responsibilities—training Quentin, upholding her position as Sylvester's knight, and paying the bills—but she can't help feeling like her world is crumbling around her, and her increasingly reckless behavior is beginning to worry even her staunchest supporters.

To make matters worse, Toby's just been asked to find another missing child...only this time it's the changeling daughter of her fellow knight, Etienne, who didn't even know he was a father until the girl went missing. Her name is . She's a teleporter, like her father. She's also the kind of changeling the old stories warn about, the kind with all the strength and none of the control. She's opening doors that were never meant to be opened, releasing dangers that were sealed away centuries before—and there's a good chance she could destroy Faerie if she isn't stopped.

Now Toby must find before time runs out, racing against an unknown deadline and through unknown worlds as she and her allies try to avert disaster. But danger is also stirring in the Court of Cats, and Tybalt may need Toby's help with the biggest challenge he's ever faced.


Toby thought the last year was bad. She has no idea.


My opinion:
It has been a moment since I’ve read Toby’s adventures but it was really easy to join them once again. The story works wonderfully well as a whole with enough info from precedent books to remind you or teach you important elements so you are not lost and at the same time you can understand the story really easily without having read the other books. It’s really well done.

Now I would still recommend you to start at the beginning but only for the relationship (kind of) between Toby and Tybalt.  Really it’s a pleasure to see them banter, have their kind of hate relationship but still be there when the other needs it and in Ashes of Honor finally you have more ^^ ( chutt I won’t tell you more)

Tybalt is sure one of the elements which made me love this series so much, he is really a cat with its way to annoy you to the fullest but still manage to have you around his finger with a simple look ( all those whit a cat understand that I’m sure^^;;). This time we get a deeper inside of his relation with his nephew Raj and the mechanic of the Cait Sidhe court which is quite special.

As often it’s not an easy series to explain as a lot of little elements seemingly insignificant gets really important either in this book or for the future ones. However I can tell you that Toby went a long way in maturing in this book especially after all that happened before and…what could be strange for those who follow the series… this is the first book with a real HEA! Yes really for once the book close on happy element not on something dreading letting us know it will get worse….
Now I even want to read the next book more as strange as it sound but I know it can wait as no cliffhanger or something of the sort has me on edge.

Seanan McGuire really surprises me this time and it’s one of the best additions in the series!