Are you deep into halloween preparations as well? On my side i'm trying a full new range of recipe and decorating a room for a special Cthullu party so i'm busy but not so much as not to continue my quest for october  paranormal creatures reading^^.

I hesitated between two books for today, so perhaps you will get a treat later or tomorrow, as it fits Brenda's event as well..... at the end i decided to opt for the series which has a new release this month ( so blog tour for those interested). I choose this one because you do have the opportunity to discover more about the author Celeste and win one book as well if you go participate in the GGMMMU ( see my post here or enter here).

For the little history, this series " Fueled by lust" by Celeste Prater must be read in order to be enjoyed fully so when Celeste learned i was behind she kindly gifted the missing book so i could read and review them in order....beware though that it's a addictive series so when started don't be surprised if you want the next book with delay.

As this book and series is super super steamy i would recommend it only to those above 18 so if you are too shy or under that age you can skip this post. 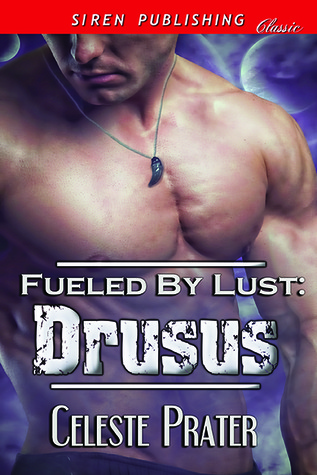 THIS IS BOOK 1 OF THE SERIES - SERIES BEST READ IN SEQUENCE
Drawn to by a vortex link between Insedivertus and a plethora of potential mates, Prince Drusus Tarquinius focuses on ensuring the survival of his alien race. Avelina Roth is simply out on the town trying to forget her love troubles when their accidental meeting draws them both into a dangerous liaison that brings a hated enemy back into Drusus’ life and shatters Avelina’s belief that we are alone in this universe.

How does troubled in love Avelina Roth deal with the overwhelming Drusus Tarquinius, a force not of this Earth, when he engages her in his mating cycle the moment they meet? Will Drusus overlook the past and move forward with the final mating? Will Avelina survive to know the full depth of his love when the planetary war that pushed the aliens to seek mates knocks firmly on her door?


My opinion:
OH my!! Let me tell you that the summary is putting lightly the level of steam of this book! This is really above the level of what I expected and was ready for but before explaining this point better to start by the beginning.

I greatly enjoyed this book so I’m more than happy that the Celeste offered me a copy. She built an alien world quite interesting and I really loved how she used roman history to mix with the alien one. It gave us a better grip on it, helped me to envision it better and it was also original and well though. To resume it:… Etruscan travellers found a vortex and arrived on a alien planet where the living being (of energy) decided to learn from the travellers and adapt themselves.. So language, architecture and I guess some custom from the Romans are still in use on Insidivertus world …. Yes for once we are the one exporting something^^;;

Then besides the setting, I also loved the whole idea for the main element of the plot. The aliens are of pure energy so they need it to survive….and how they found it while in our world? In the lust we give off… Why did they come here? Aside from the fact they knew our world existed, is simply because their world was attacked and all their female killed…..if you know some of your Roman history  you will think about immediately when you meet the villain ,coming from Protonecis planet.
Drusus was an interesting character, as the prince of their world he wants to protect those under his command and he acts. He is not a leader from afar, no; he is on the first rank with his men and dirtying his hands or so to say. He has been betrayed in the past but he manages to overcome that when meeting Avelina, he did try to see it as unimportant at first but instinct is stronger.

Avelina is a young woman with healthy curves, she is intelligent and strong willed but still she manages to get a boyfriend that was using her and trying to make lost weight… she hates that about him, wanting to be loved as she is but she still let him call her again etc… the fact she couldn’t just throw him away is what I disliked the most about her. I appreciate she was strong in her beliefs and appreciating herself… just I wanted her to b more alpha I guess. When she meets Drusus she is hesitant at first because she thinks it’s a joke or a night stand but still act on it …thankfully trust and honesty make their appearances quickly.

The suspense was there…but it wasn’t not the forte of the book either as you guess the traitor immediately and his reason as well but the story flow steadily so your attention doesn’t divert from it^^.

Now the romance….. the romance itself is a good one well written… the sex parts… that’s what make me hesitate in my scoring of this book…. I was expecting some steam… not something that steamy. It’s not bad written, not vulgar (or I would have hated it) but Drusus was a little too domineering in my opinion and it could have been less described… I mean for example at the end I would have wanted more info about those coming on earth for example instead of 2 chapters of steamy.. I understand which result they wanted to reach but I think the author could have it done differently.

Don’t take me wrong I want to read the next one ( I mean when you learn about Severus in this one you have to see him shackled^^;;)  but I do hope that even if the steam level stay the same that the focus on the story will be more developed.( now i was told i could simply skip the steamy parts and enjoy the story fully so be ready for the rest of the series in review soon^^)

As I said raking this one is hard...for the story it could be a 4 stars even 4 and half as I loved it  … but the other side… I can’t give more than 3 as it written because I could read it but it was not to my taste so… a 3and half seems right…

If you want some terribly sexy aliens, if you love alpha domineering and if you are in need of a sexy, steamy story this is the perfect one for you if you are above 18! If you are not shy and want to discover the beginning of a series that can be quite promising this is also one for you. If you prefer sweet romance… then yes you should avoid Drusus or at least skip the steamy parts to focus on the story only .
Disclaimer: All opinions are my own and no compensation was received in exchange for this review