So here the situation is still quite unsure since my mother will only have ( or at least hope so) some answer tomorrow after her scanner, meaning i'm still completly in the expectative. When i will manage to read ( and write my review on what i read), when i will manage to craft again ( my hands are both improving and worsening -_-) all i know is that i will do my best with as a priority the christmas parcels and letters then the reading and of course both of these after my family health.... so far the motivation is still here and that's a lot.

So i couldn't read but i managed to write the review on a novella i finished before all these happened...( and i will perhaps try novella first since i have less time it could be a great idea) anyway  you know how i've come to love the October Daye series and the authors is kind enough to add several short stories to help us learn more about secondary characters.... my favourite being Tybalt i couldn't miss the first novella about his past  published in the anthology " A fantasy Medley2" but don't worry there are a lot of free ones on the author website ( like the second novella about Tybalt!! but better to be read after book5).

Since it's a novella my opinion will be short because i don't want to reveal too much but i enjoyed reading it even if i hoped for a little more ( perhaps novella 2 will correct that;) ) 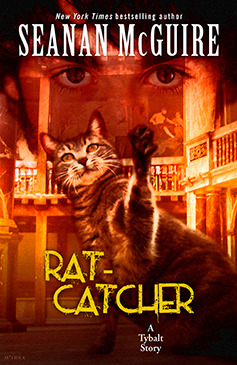 In the year 1666, a young Prince of Cats named dwelt peacefully in Londontown with his beloved sisters, Jill and Colleen. He spent his nights at the theater, drinking in the works of Shakespeare, and had no interest in the day when he would be expected to rise up, challenge his father, and take his place as a King of Cats. For , kittenhood was a wonderful dream, and one that he hoped would last forever.

All stories have to begin somewhere, and this is where the story of Tybalt, King of Dreaming Cats, began: with a boy, and his sisters, and the city that he loved and never planned to leave. When duty calls, can he make the choice that will keep them all safe, without giving up everything that he has ever wanted from his life?

Rat-Catcher can be read at any point, as it is background for the series. It is best read after at least two volumes of the main series, to give a firm grounding in the character.


Rat-Catcher was originally published in the anthology A Fantasy Medley 2, released in December of 2012. This limited-edition volume can be obtained directly from Subterranean Press.


My opinion:
As a fan of Tybalt , I was expecting a lot from this short story… I wanted to know how he became who he is, why he is so different etc….. perhaps I was expecting too much. Oh I liked this story no problem on that side and it’s true I would never expected him to become king like that but at the same time it wasn’t enough ^^ perhaps too short for my taste even if there isn’t a cliffhanger and the story is complete. It’s a really emotional read and while the humour is there it’s not as present as in the series and we learn a lot more about the cait sidhe customs which aren’t as kind as we could hope ( hey they are a kind of fey so it’s quite understandable)

Perhaps I was simply disappointed he didn’t try harder with the actors….he did try yes but since he was already breaking the rules couldn’t do it a little more just to be sure they knew and understood? However he is still young here and perhaps he simply couldn’t^^ after seeing all proud and powerful and compassionate in the series it was strange to see him as a kitten only  but at the same time all these events did built him as the Tybalt we all love.

I’m really glad I waited to read this because it’s true you enjoy it more when you already know the characters from the main series…. Now I’ve learned there is another short story about Tybalt and I can’t wait to have the time to read it  but I must advance in the main series first since it’s recommended^^. I won’t forget to let you know about it. If you love the October Daye series those shorts stories are really excellent bonus but, thankfully , you don’t have to read them to enjoy the main series it’s just some extra if you can’t wait until the next instalment^^.