While i'm getting ready to survive a new heatwave , i continue to read and thi time i'm giving you my opinion on the second book in the series by Tracy Cooper-Posey " Project Kobra", a romance suspense with spies. 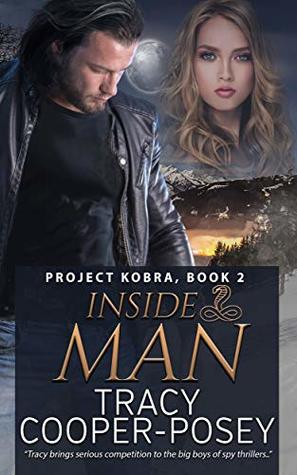 It’s her job to protect Cain…if she doesn’t kill him herself.
Agata Kelsey is an MIT Engineering Honors graduate, speaks six languages fluently, and a CIA operative with no time for fools. As punishment for a job gone wrong, she is assigned to the Paris-based security detail guarding Cain Ishmael Warren, the wild, uncontrollable son of former Vice President Warren.

Cain Warren resents his security detail with every shred of his rotten, irredeemable soul, especially the most recent addition, a lightweight piece of fluff with a mouth and an attitude.  He ditches them at every opportunity, except she’s hard to shake off.

When trouble arrives, Cain is shocked because it’s nothing to do with him.  An old enemy of Agata’s puts them both in his sights, forcing Agata to run--and take Cain with her on a chase across France and into the Alps wilderness, with the Kobra’s venomous Gavriil Zima far too close behind them...

This romantic thriller is the second book in the Project Kobra series.


My opinion:
First while this is the second instalment in a series it works well as stand alone as well, that being said to keep track of the characters reading in order is probably better.
This story takes place 1year after the event in the first book and the team has been disbanded and the members scattered  however they haven't forgotten about Kobra and his machinations. While Dima is trying to get her team back together, hits on the team members are starting and they are not left  without scars. The mole is still feeding info to the Kobra and they are running out of time.

Agata is an analyst but as punishment she is sent to protect Cain Warren, a young man with a bad reputation ...still she won't do her job badly so she refuse easy way out and do follow her charge everywhere discovering more about him that she could have imagined. When someone come shooting she jump into protective mode not knowing that she is the main target ...discovering that information doesn't change the fact that she wants to protect Cain, and she must do it alone.

Trying to reach her team while evading those on her trail, both Agata and Cain  will need to open themselves and fight for their life while building something deeper than trust alone.

This is full of action , lot of suspense and really a good romance suspense with moment we could cry, moments to make us smile and want to see justice served. This end with a cliffhanger as the mole is still on the loose but we do get some kind of happy ending too.

to recommend if you want romance suspense full of spies and treachery as well as a huge dose of action.