The Prophecy ( Daughters of the Morrigan 1) by Nina Croft

this week i should give you my opinion on several book since i have been quite silent earlier this month. It's not that i didn't want to read but i had a craft project to finish before a penpal visist and while sick it took longer than i thought.

Now it's reading time ^^, today i'm started with a story by Nina Croft, it's a new edited version of a precedent release i haven't read so i will tell you my point of view on this new version only. 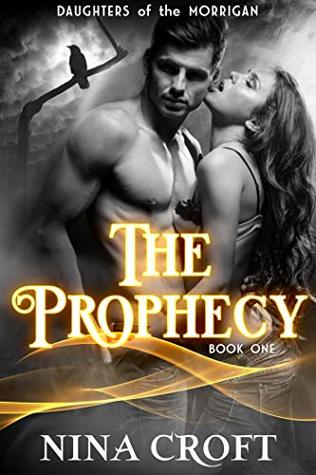 Whoever sacrifices the virgin, Raven Cole, on her twenty-first birthday will achieve a great victory in the war between good and evil.

That’s bad news for Raven. Half-vampire, half witch, and cursed from the moment she was born, Raven has been a prisoner of the fire-demons for the last seven years. Now, as her twenty-first birthday approaches, time is running out.

Kael Hunter believed he would do anything to stop the fire-demons from winning. Until he saw her. Now, rather than kill the alluring vampire himself, Kael has another plan: to prevent the prophecy by taking Raven's virginity.

But Raven is prepared for death not seduction. Can Kael use their one night of passion to convince her she has a future - and that he should be a part of it?


My opinion:
Good beginning, excellent even but i want more of this series to answer some of my questions? That being said this story is perfectly balanced between action, romance and intrigue so we are not getting the feeling it's too short ; of course we wouldn't mind more but it's really well done we don't get an unfinished feeling and i loved that.

The universe sound riche we have shifter, vampires, witches, demons and faes and probably more so i do want to know more like how a vampire can get a witch pregnant; it doesn't bother me it can be part of the universe but i would have loved a small explanation as it's not usual.
With so many group of paranormal we can imagine that they are a lot of tensions and intrigue and we do get a small glimpse of that with what is happening inside the council but not much yet.

We are focusing on  Raven half vampire, half witch  since a prophecy is saying that who will sacrifice her , with some conditions, will be the big victor  she was doomed.  Each camp wants her dead...and she partly accepted that. So when someone comes to save her she can't really believe it or more exactly she isn't sure that is why should be done after all what she was confronted to while in captivity.
Kael is a shifter, the last one and head of the council. He has a lot of responsibilities but he is utterly loyal and a good person. His powers are really interesting and he is quite powerful  but not arrogant which i really appreciated. He is determined to save Raven for deeper reasons than even himself thought at first.

This is a great story and i will be curious to see  how it will evolve with the numerous twists we already got. To recommend