I didn't plan to make you wait so long between two post but time flew and since i'm deep in search for some papers, and running between administrative appointments, i didn't see where the time went.

Still with two new release next week you should have enough review to make it up for the delay. Today we continue with the series by Jessie Lane " Big Bad Bite" and the second book " Walk on the Striped Side) while waiting for the novella 2.5 that release on the 28th so enoug time for you to read both first books if you haven't started yet. 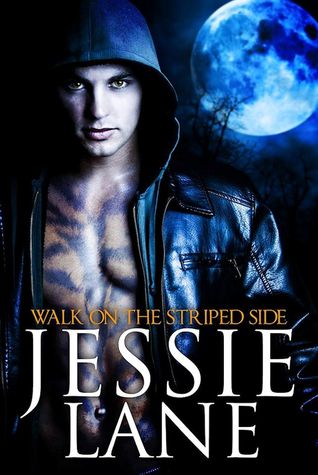 Does he have his claws in her for good? Or is she just yanking his tail?

Elena Demos’s life has been turned upside down. Her mother has passed away, leaving Elena and her two half-sisters to deal with their mother’s will and the crazy stipulations it contains. For the three sisters to inherit the substantial amount of money left behind, they have to go to work with two aunts they’ve never met, in the family business they’ve known nothing about, Amazons Inc. If that isn’t bad enough, she runs into the man who once broke her heart, and it’s only their first day on the job.

Gage Ivanov is a stupid beast. He let the woman who should be his mate go because she couldn't be told of his Other identity. Now, Elena’s back, but she refuses to give in to his demands for her to be his mate. The timing for all of this couldn’t be worse, either, because Gage and his circle of friends are trying to subdue a rogue pack of wolf shifters in who threaten to out the Others to the world of humans. Will he be able to juggle the oncoming conflict and win back his mate?

My opinion:
I wanted more of the tigers and i sure got it. This book is my favourite in the series so far, i laughed, smiled sometimes was torn on whose side to support but i really loved this book!

Gage is a tiger so full of himself and so, so feline. He is the alpha and doesn't take a no for answer, he fights with or without claws but never give up however he is also capable of a lot of tenderness and even better admit that he is wrong^^. Also like our real cat he can be patient when we wants and very demanding the next second^^.

Elena is a strong woman and not only physically but deep inside she has a little heart. Taught  by her mother not have any attachment ( except with her sister), she isn't used to  think about finding a man to settled with so when she comes to term with that idea at the same time she is kind of pushed aside it hurt very badly....leading her to act like a b****, sorry but i can't think of any other term. She was hurt by him but first thought about making him suffer by hurting ( and worse) his sister. At that time she lost point for me but thankfully she found her brain again but not after playing bad kind of joke on a very on edge tiger.
She is a good woman though and didn't hesitate to jump in the adventure of going to save someone abroad just because it was the right thing to do. She is protective of her sisters but not only so she is a character you get attached to.

Between  Gage and Elena  the situation is explosive, sexual tension but not only ...they both crave the other but trust must be built first and it's not easy with their past and a certain  tendency of the tiger to stick to his word meaning attached is attached and not a metaphor. That sure leads so some funny situation and some steamy scene.

So as a resume we do have the part of the story focusing on Gage and Elena and that part is kind of complete ( even if we want more  we can be happy for now) but we also have the main story line moving with the trek to and it's consequences. However that part isn't  finished and we are left to wonder the next step, consequences and it makes us happy to jump into book 3 as soon as possible while we can  wait as it's not a real strong cliffhanger...so it's perfect.

This is a series i sure plan to continue as we have another tiger who revealed a bit of himself making me more intrigued and a demon that sure hid a lot of secret.

Disclaimer: All opinions are my own and i voluntary reviewed this book
Publié par miki à 05:29