The Demigod's Legacy by Holley Trent

This week,  i have a new release to introduce you ...it's the first book in a series which is in fact  a spin off from the Desert Guards series from Holley Trent. Being who i am i had planned to read the main series first since i have it to be up to date but i got  very sick and i didn't manage. Not wanting to give up i started on the spin off as it's supposed to work as stand alone...and yes we get some spoilers but nothing major. ( however since that serie box set is less than 1dollars right now i can't recommend you enough to give it a try)

I will gladly read the main series now so you can expect a review for it this year but for today let start with the spin off The Demingod's Legacy by Holley Trent. 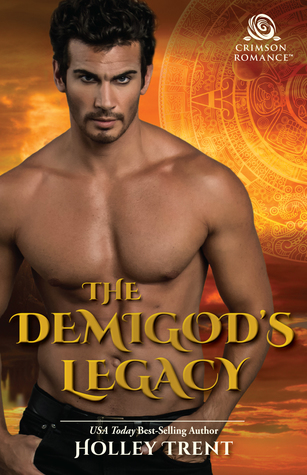 Six hundred years after losing his wife and son to his cousin’s deadly scheme, the demigod cougar shifter known as Tito Perez still refuses to take a mate. He couldn’t protect his family in pre-colonial where Aztec gods freely roamed, and he won’t risk endangering another in modern .

Too bad he doesn’t know he already has one from a tender affair with a sweet bar waitress he abandoned.

After waiting five years for Tito to return to his senses, December Farmer tracks her daughter’s absentee father to the small town of Maria, New Mexico, to make him step up, but he’s not the only one in for a shock. The town is overrun with supernatural beings and, apparently, her daughter, Cruz, is one of them.

December isn’t sure she can stomach being the mate of an immortal shapeshifter, but the stakes are higher for Tito. His cousin intends, yet again, to take away the only things Tito holds dear, and this time, Tito may have no choice but to cast his precious humanity aside and become the unflinching warrior he’s never wanted to be.


My opinion:
Wonderful! While i was a little afraid that since it's a spin off series and i haven't read the main one completely i would be lost it wasn't the case at all!!!. This story can work as stand alone perfectly even if you never read any Desert Guards books , now of course it's better if you have read that series first (especially when the box set is such an affordable price ( less than 1dollars for 4books!)  but if it's your first attempt at this universe you will just want to discover more. Yes they are some spoilers if you start with The Demigod's Legacy but nothing you can't live with.

Tito is a sweet demigod....he isn't an alpha, he is kind of avoiding responsibilities. He isn't a coward simply too sweet and kind for  the gods and goddesses scheming. Because he suffered a lot in the past he prefers suffering again and making sure his mate his safe because far from him than offering her the choice....thankfully in this universe women have a mind of their own and can take initiatives

It's one of the thing i love in this universe...the women (human or female cougar alike) are equal to their mate... they aren't little thing needed protection or crying for nothing. No they have their own role, different from their counterpart yes but essential, depending on their affinities, powers or sensitivities . They also have a choice. They can accept a mate that come with responsibilities or give up on such a strong love it's their choice it can't be imposed on them. Even better....as we learned with Glenda ( who we do see in this book) they don't need to change i always found it unfair that so often it's the woman who must change to adapt...in this universe no. Sometimes it can happen if she chooses that but it's no way an obligation...a cougar can love a human without troubles.

December is a good example of that fiery spirit....she had to leave home too soon -we do learn why so i won't spoil that- so she is independent and used to work to get what she want. Working as a waitress she met the Foye boys without knowing their nature and via one of them she met Tito so handsome that she was immediately attracted to him...one thing leading to another  they got together before say male got afraid and left without any explanation. Not only it's not fair or proper but without his knowing he didn't leave her alone as she gave birth to his daughter Cruz.
As a mother , December is determined to give the better to her daughter and if it means chasing down her father to make sure he acts properly she would do it without shame. And she succeeds which wasn't an easy feat as he didn't give her a lot of information to start with.
Discovering the nature of her daughter and her father....learning they are in danger...that's a lot to cope with but she will do it in her own way and if it means making sure her mate remember what is right and what he wrong she won't hesitate to put her foot down.
It was really funny to see her put Tito in his place firmly but also standing at his side. She is ready to fight for what is important for her no matter if the enemy is supernatural and she is only human.

Really it was a great story and i want more of that universe...i'm especially curious about the fallen angels Tarik and his friend so  i hope their book will be next. If you want a  good series with cougar shifter, divinities and other paranormal creatures. Action, passion and touch of humour this is a series to try for sure!

Disclaimer: All opinions are my own and i voluntary reviewed this book
Publié par miki à 00:37